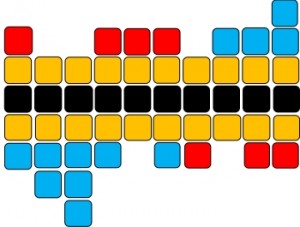 Be aware that blow bends take place at the top end of the harp. We’re talking holes 8-10 in principal. You will also find a slight dip in hole 7, however as there is no semitone interval between the blow and draw note, political correctitude says this is officially not a bending hole.

Why at the top end? Because we bend from the higher note in each hole. In holes 1-6, the draw note is higher than the blow note, so we use draw bends. From 7 up, it’s the other way round, so we use blow bends. Avoid using higher keys, C, D, E, Eb and F as you’ll probably burst a blood vessel before you get a bend. Give yourself a break and use a key Bb or lower.

Top end reeds are shorter than the others. Consequently they need a lot more pressure in order to play an accurate and controlled bend. They are not as delicate as you think. Ever tried twanging a ruler on the edge of a desk? The shorter you make it, the higher the twang and the harder you have to pluck. Same principle. Ever tried to balance on a stationary bike? It’s hard. Once you start moving, it gets a lot easier to stay on. Try a blow bend with a feeble blow and you’ll get little or no response. Blast it and, in time, you’ll be able to bring down light aircraft. So put the dog out, plug your ears, and let’s get started.

It helps if you know how to whistle through your lips in the traditional way. Much of what you do to achieve a whistle – tongue and jaw position – is similar to blow bending. Try whistling a high note and lowering the pitch. Bending a blow reed uses the same mechanisms – you’re just projecting your effort through a hole on a harmonica.  Whether you can whistle or not, try this preliminary exercise:

Hold the palm of your hand in front of your face (about 20cm away). Make sure your hand is open flat, finger tips pointing at the ceiling and palm level with your mouth. (It doesn’t matter where your thumb points, as long as it doesn’t obstruct your palm). Now purse your lips and blow a jet of air into your palm. By adjusting your lips and jaw, try redirecting the jet of air upwards onto your fingers and downwards onto your wrist without moving your head or hand. Now see if you can keep a small cushion of air inside each cheek as you do it. Be a Mini-Gillespie, don’t go blowing your cheeks out all big! Finally, keeping your lips closely pursed, increase the force of the air jet by pushing from the diaphragm.

Grab a low key harp and experiment using the technique outlined above. It’ll sound grim to begin with, but persevere. Remember to push hard – it will sound loud at first, but you’ll have more control and in time you will learn to economise your effort. On your first few attempts, you will probably find that the reed schreeches and then stops responding, or slips free. The screech is the reed telling you it doesn’t quite know where to go – this is the ‘bite point.’ By pushing a little bit harder still, you should break through the screech and find the bend. The scenario is similar to the clutch and accelerator pedals on a car. So when you find that bite point, let the clutch off and squeeze the accelerator! I would suggest you start on the 8 blow bend as it is marginally more forgiving…

Listen to real examples of what can happen. Jimmy Reed and Sonny Boy 2 were great exponents. You’ll find blow bends come into their own particularly, though not exclusively, in first position playing (straight harp). Jerry Portnoy’s ‘Home Run Hitter’ is a fine example. Of course you can blow bend in other positions too. Check out Magic Dick’s ‘Whammer Jammer’ – he’s playing in second position (cross harp).

You can hasten the start of a blow bend by articulating a ‘Tuh’ or ‘spit’ from between your lips to trigger the reed. Once you start blowing the bend, sustain it and make a slight up and down movement with your tongue and lips to produce a fancy modulation in the bend. The blow bend at the start of Whammer Jammer is a good example of this effect.

And finally try looping off a bend reed – direct blow bend to straight blow (or reverse) in the same hole and pass into an adjacent straight blow hole. For example: 8 blow bend, 8 blow, 9 blow or perhaps blow 9, blow bend 9, blow 8. It’s the start of bigger things. Trust me I’m a doctor.

The opening to ‘I’m In The Doghouse’ on 9 Below Zero’s ‘Don’t Point Your Finger’ album is an excellent example of this.