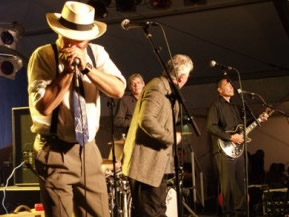 Here are a couple of simple techniques that will elevate your phrasing and musical expression. Call them musical ornamentation.

Glissando (gliss.) is derived from the French verb glisser or it’s adjective glissant, meaning sliding or gliding. A glissando can be achieved in an upward or downward direction. It often preceeds the beat and target note for impact. It can also follow the beat and note for statement. Occasionally it appears during a passage for dramatic effect. The range of the sweep can vary, but follows a natural spread and decay. Piano players achieve glissandos by running a finger or thumb across a spread of keys. Jerry Lee Lewis is a prime exponent.

Portamento comes from the Italian verb portare, to carry. This is a continuous and smooth upward or downward movement between two notes. Herbie Flowers uses it on the bass throughout Lou Reed’s Walk On The Wild Side. Guitarist can achieve the same effect by bending a string, or strings, laterally across the guitar neck. Slide guitar is all about portamento. And of course there’s the whammy bar – Hank Marvin used it on numerous hits with The Shadows including Apache, FBI, Dance On and Wonderful Land. Vocalists will ease into, or out of, a note using portamento. A Slide or Swanee whistle is another example – great for emphasising comic slips and falls. And finally, how about a wolf whistle….

Glissando on the harp

Blowing or drawing, run your breath lightly over a set of neighbouring holes, sounding them all in passing. This can be achieved by ‘snatching’ the harp – a short twitch from the wrist – or a light head movement. Now pick a target note and end your sweep there with a clean, full tone. Your glissando can run up to, or down to, the target hole to provide impact. It can also create colour as you reverse the process, sweeping off your target note, usually (but not exclusively) in a downward direction.

There are endless examples! On J.Geils Band’s Pack Fair And Square, Magic Dick uses a glissando after each line of the chorus (4 3 2…2 draw on an F harp in 2nd position). The first phrase on Sonny Boy II’s Help Me ends with a glissando (3 4+ 4′-4…4 3 2…on a Bb harp in 2nd position). Little Walter often used glissando, hanging on the 2 draw and snatching a drawn sweep down from the 4 hole ahead of the downbeat.

Portamento on the harp

This often comes as a tastefully phrased bend into, or a bend off, a note. No bend, no glissando. It soon become so instinctive you probably won’t even realise you’re doing it. Why stop dead on a note when you can add character and expression by bending off it before letting it go? Why start cleanly when you can milk a bend into a note? It all adds human quality to the sound.

Gerry Portnoy’s Real Gone Guy from his classic 1995 album Home Run Hitter is played on a Bb harp in 2nd position. The last note of the introductory run (before the three stabs) is first draw bend on hole 3. Play it cleanly and it just doesn’t sound like Portnoy. Follow it with portamento into the second draw bend on the same hole, and it’s in the pocket. Just one of countless examples out there.

As ever Magic Dick provides us with a fine reference. Check out the start of the harp break in Pack Fair And Square by the J.Geils Band; it’s on an F harp. His lengthy and pronounced full draw bend on hole 1, released into straight draws 1 and 2, makes your toes curl right up….then you start leaping about, nodding your head like a goon. Tension, impact and resolution to the max!

Portamento into trills and flutters

Portamento or bending into a trill is a classic trick on the harp.. Sugar Blue’s version of Ain’t Got You or Nine Below Zero’s early version of Rocket 88 both use this right from the start. The Portamento starts on a momentary draw bend in the the lower of the two holes, before breaking into a regular trill. Back to Magic Dick on Whammer Jammer…the very start of the number demonstrates portamento from a full draw bend in hole 4, through clean draw 4 and into a fluttered 2-5 draw.

This is a lick that Billy Boy Arnold uses to great effect in Ain’t Got You. Grab an A harp. It comes at the end of each verse and the notes are 1 (2 3) 4 4′ 4. Buy yourself a copy of his fabulous 1995 album Eldorado Cadillac.