Tongue slaps
This is a technique which goes hand in hand with the tongue block method of playing harmonica. Instead of pursing or puckering, you are covering about four holes with your mouth, blocking off three holes with your tongue and playing the remaining hole. Typically this means blocking the three holes to the left and playing the remaining hole on the right. So you might blocks holes 1 to 3 and play hole 4 (blow or draw). The reverse can also be true however – you could block 2 to 4 and play hole 1 (blow or draw). Either way the result is a system of playing where you work from the side of the mouth rather than from a central pucker. Tongue slapping is achieved when you briefly catch all four notes before ’slapping’ your tongue onto the harp to single out the one note you need. It adds a crunch effect to the sound. By repeating the process, a jig or shuffle rhythm can be created.

Triple Tonguing
By articulating with your tongue, you can give the impression of playing single notes rapidly. Try saying either ‘Ta-ta-ta’ or ‘Diddley’ as you blow or draw. Your tongue does not actually touch the harp, but stays inside your mouth. For the record, I find diddling easier and faster than ta-ta-ing! For a great effect, try alternating rapidly between draw 2 and blow 3 using a single ‘Diddley’ in each direction. This an effect Mark Feltham uses on 9 Below Zero’s fantastic album ‘Live At The Marquee’.

Fluttering or Dabbing
Check out the very start of Whammer Jammer or Walter’s Boogie. In both cases Magic Dick and Walter Horton use this technique. In effect it is tongue blocking across 4 holes, while rapidly opening and covering the lower blocked holes to produce an intermittent chord. It is a medial on-off application of the underside of the tongue, not a lateral sweep or trill. It is delivered to a subtle triplet rhythm, while giving precedence to the melody note in the highest blocked hole. When applied, we are not poking out a rigid tongue, but flattening and relaxing it, and using the underside of the front end to detect the central divider of our target holes.

To begin learning this technique, touch the underside of your upper lip with the widened tip of your extended tongue and say la-la-la, la-la-la. Now do this breathing in. Next, pick up a harp and cover holes 1D=4D with your embouchure, ensuring the harp is pushed well into your mouth for tone. Dropping your jaw will help. Favouring 4D as your melody note, draw in breath and apply the tongue flutter. Once you coordinate all this, listen out for the optimum tonal position and adjust accordingly. You will recognise this by its chunky sound quality. Relaxing and letting the harp resonate adds the final touch. 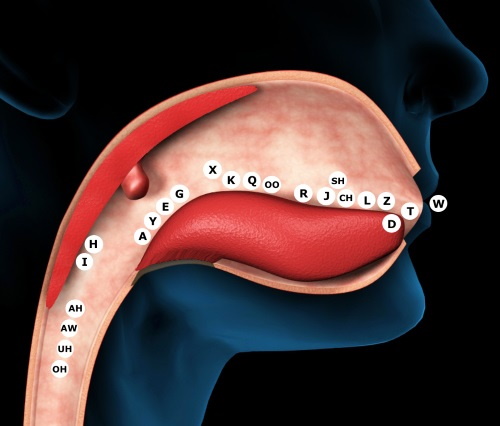 Articulation
Articulation can help to trigger the start of a note, provide a sequence of repeated notes, or lend certain sound qualities to specific notes.

Any of the hard sounds produced during speech, as well as the long vowel sounds, can be articulated through your harmonica. Try ‘ka’, ‘tah’, ‘tuh’, ‘dah’, ‘doh’, ‘deh’, ‘doy’ and ‘diddley’.

Experiment with songs that include repeat notes, such as Row, Row Your Boat, where the merrily, merrily merrily, merrily is a useful vehicle. What Shall We Do With a Drunken Sailor, and She’ll Be Coming Round the Mountain also provide good opportunities to try out different forms of articulation.