The blues keep following me around 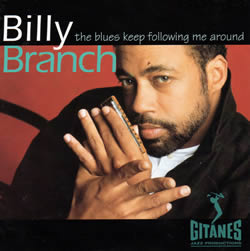 Ever since buying a copy of the 1990 W.C.Handy award winning album Harp Attack, Billy Branch has had me intrigued. He’s pictured on the cover as the new kid on the block, alongside three legends – Junior Wells, James Cotton and Carey Bell. Billy provides fresh reinforcement for the old guard, enlisted to extend the Chicago Harp tradition rather than bend it (as Sugar Blue might have done). The album is of course a valuable celebration of ChiTown honking, however the full extent of Branch’s artistic ability was probably hidden under the barrage.

So it was when I heard his 1995 solo album, The Blues Keep Following Me Around, that I really began to appreciate Billy’s work. Again it stems directly from the Chicago idiom – how could it not – but it makes a fearless march forward. It is new, energetic and wonderfully varied. Billy’s passion for the blues shines through the whole recording and he takes no prisoners. His cover of Tony Joe White’s Polk Salad Annie is a particular classic. With a heap of soul in the vocals and a brooding, pulsating groove, Mr. Branch takes you down in Louisiana and dumps you right on your…corn patch. Which reminds me – Billy is not only a cool harp player, he is also a magnificent singer.

So it was the Good Doctor found himself in Chicago the same day Billy Branch And Sons Of Blues were in town. With absolutely no excuse not to go visit, the Doctor jumped a downtown taxi and ordered the driver to speed him ten minutes along the lakeside to Halsted and its brace of blues clubs. He was on a mission.

Kingston Mines and B.L.U.E.S. are, to be brutal, tourist traps. While B.L.U.E.S. at least offers the ambiance of a traditional music pub, Kingston Mines is a hulking beer hangar, devoid of character. However, if one of the Doctor’s all time harping heroes happens to perform nearby, he’s paying the cover charge and he’s in there. He’s also prepared to suffer the appalling ales in the name of art. A $20 bill was duly tendered and the Doctor’s skin was stamped.

The Doc introduced himself to the maestro and was graciously invited to sit at the head table. With Billy’s permission he inspected the heavy-duty leather harp bandoleer that lay between their glasses, like an off duty lawman’s holster. The bullets were almost exclusively hand made Hohner Marine Band. ‘When I first started,’ Billy reminisced, ‘the other guys laughed at me. If you hadn’t played the harp for at least five years, they didn’t take you seriously.’ Apprenticeships, we ask you. They’re probably right though. The Good Doctor mentioned his favourite Billy Branch album The Blues Keep Following Me Around. ‘You should check out Mississippi Flashback too,’ Billy replied. There was eye contact and that connection you get when you meet someone for the first time, but you feel like you’ve known them a while. The Doc liked this guy. A lot.

It’s A Crazy Mixed Up World 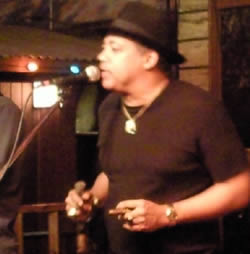 The house’s Master of Ceremonies – the inimitable Mr Pellegrino – took the stage and delivered a well rehearsed and humourous introduction to proceedings. As he did so, Billy sat sipping brandy and chatting to well wishers at the back of the club. The band shifted into gear, with keyboard, bass (five string electric), drums and guitar. Together they delivered two warm up numbers sans band leader, the drummer handling the vocals. Their opener was distinctly funky. The follow up was a big ballsy New Orleans style blues.

Without a pause, the band faded into a slow blues and the MC returned. “Ladies and Gentlemen,” he croaked, “it’s time for our star of stage, screen and cinema, the man who starts off the Chicago Blues Festival… this is Billy… Branch.” Rosa, his partner, decanted some brandy into Billy’s glass and passed him his harp belt. Billy took the stage holding his ‘stick’ harp mic, with a radio connection to his solid state Peavey amp. Taking command, he addressed the vocal mic and engaged his audience. “We’re gonna take you back to where I come from, back up in the country in Mississippi… If you ever been mistreated,You know just what I’m talkin’ ’bout, I work five long years for that woman, And she had the nerve to put me out.‘ His harp sound was awesome.

The next number returned to the funky groove. Radio mic and diatonic harp in hand, Billy hit the lead vocal, “I’m going down…down, down, down, down, down.” He injected snatches of urban harp between some very fine singing. Mid-song, Billy pulled off a solo break from the top end, with a mesmerising cascade of notes and licks. It was simply amazing. And he was staring straight at the Good Doctor, who knew exactly what he was thinking. ‘Have some of this mate!’

Next up, a swing blues with Chromatic harp. The Doctor’s favourite number of the whole evening, Little Walter’s Crazy Mixed Up World. A tsunami of bodies hit the dance floor. And as the chorus kicked in, the band’s front line added shoulder swings that were synchronised to the ‘bomp-bomp’ stabs in between the lyric. It was utterly fabulous and cooler than a prize winning cucumber.

“Burn, burn, burn,” followed, with diatonic harp. This was hard hitting R&B with A1 vocals. It could almost have been Dr. Feelgood in its ‘hit ’em hard, hurt ’em bad, then get out quick’ approach. Just for good measure however, Billy chucked in some top end blow bends and special effects from his octave pedal. The result was technical accomplishment rather than just power play. It was slick and Billy knew it. His cheeks were billowing like linen in the breeze.

Time for Little Walter’s You’re So Fine and a harp break so Jacobesque, it was perfection. My colleague leaned over his beer, “He’s not even trying is he? It’s just falling out of the harp!” And, yes it was wizadry. The Good Doctor was dumbfounded with admiration as the main man performed with all the energy and skill of an olympic decathlete. 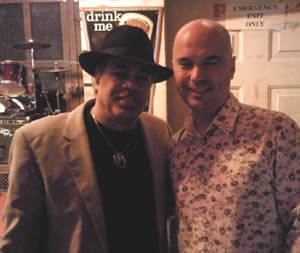 The first set over, Billy and the Good Doctor chatted and had their picture taken against one of he club’s murals. “Let’s stand by this one,” said Billy, “the cotton fields.” “Oh no!” the Good Doctor heard himself reply. “Why not?” Billy questioned breezily. “My people were responsible for all that sh*t”, replied the Doc. Billy turned to his cohort and asided, “did you hear what the man said? His folks were responsible for this sh*t’!”

Instantly, Billy and the Doc shared an elevated understanding. “Did you hear of Frederick Douglass?” Billy asked, as they returned to the table. “Think I’ve heard the name, but clue me in,” the Doc replied. “We’ve been reading his work recently,” chorused Billy and Rosa. “Think you should check him out,” Billy advised. [The Good Doctor has subsequently checked out Frederick Douglass and acknowledges his significance as an abolitionist, women’s suffragist, statesman and reformer].

Seconds out, round two

The band struck up with Pick Up The Pieces, then straight into Who’s Making Love (To Your Old Lady). At this point a beer and cigarette break interrupted the reportage, however the Doc does recall the subsequent number involved Billy Branch cooking up a monster blues strut. 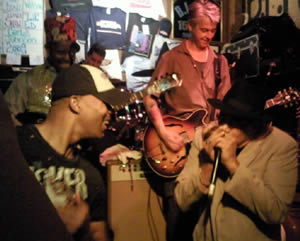 The second set finished and the Doc joined Billy in an Exodus across the street to B.L.U.E.S. where he was ushered in as part of the entourage. On stage were Li’l Ed And The Blues Imperials. As Li’l Ed wove his magical slide guitar licks, replete in JB Hutto headgear, Billy was handed a mic and responded with his harp from the floor. Totally impromptu, it was a fabulous moment and it was happening literally within touching distance. Everyone whooped, everyone hollered and everyone spilled their beer.

The Branch entourage returned to the Mines for Billy’s final set, however by this time the Good Doctor had succumbed to the dangerously anaesthetic effects of the house’s best bottled Belgian. Amidst the chats and the booze and the sets, Billy asked the Doc an impossible question. “Why do white folks like the blues?” He motioned to the audience. Turning round, the Good Doctor contemplated the sea of white faces. “I know why I like the blues”, he responded, “but I’ll get back to you with something more comprehensive.” Billy and the Doc spoke about Big Walter, exchanged numbers and the night drifted into history. Checking his watch, the Doc calculated it was 9am in the UK. Over and out for the count. Taxi for Mr Squiffy…

I will forever remain indebted to Billy and Rosa for taking me and my colleague under their wings. My thanks also go to the doorman at B.L.U.E.S. for allowing us free entry as part of Billy’s entourage. It’s not every day you get to revel in a true Chicago Blues party with the greats. Not where we come from anyway. And if you get the chance, take a few minutes to learn about Frederick Douglass. He was an unlikely hero and his story is truly enlightening.