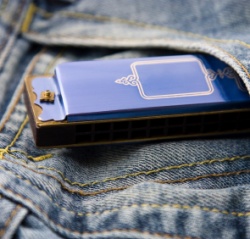 I’m going up the country, baby do you wanna go?

So you’re a blues harp player and you’ve been asked to cover a country tune. Or perhaps the blues got you started on the harp, but now you want to try something different. Either way, where do you begin? You could try kicking off your shoes, rolling up your britches, wearing a big old cowpoke hat and wedging a tooth pick in your teeth. Not.

The answer is to start by mapping out the essential notes. We can look at technique and learn licks in future posts. But as a blues player, or any kind of player, the place to start is with the Country Scale. Let’s go.. 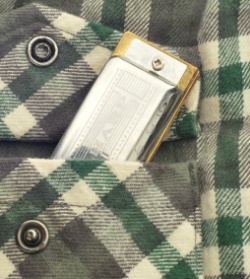 Although aspects of both styles are rooted in European folk music, Country Harp is the product of a different musical journey to the Blues. It draws less on the Black American narrative and more on the musical traditions fostered by early White settlers. Consequently, it is sometimes redolent of folk music from Ireland, the British Isles, Scandinavia and North West Europe.

Over time, the two disciplines have of course drawn from each other. Country and Piedmont Blues are recognised musical categories. There’s Zydeco, Western Swing and New Country – all of which share a strong blues infusion. You will find Cajun harp players and even Bluegrass embraces the humble diatonic lickin’ stick. Mike Stevens has been at it for years.

I’m going, I’m going where the water tastes like wine

First work at the lower and upper octave scales independently. Play them up and down and build fluency. Then run them together and mess around with them. Find your own sequences. You’ll quickly identify the principal safe notes and those with a country character. The full bend 3D” to 3D, and reverse, will become pivotal in the lower octave.

For musical correctitude, here are the remaining safe notes that loop off the top end of the harp and onto the bottom end.

Now, using the mid octave, let’s start to throw things around a bit and see what comes out.. 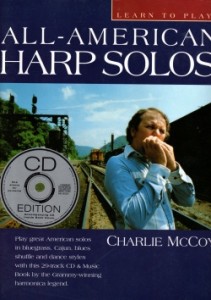 We can jump in the water, stay drunk all the time

If you want the Good Doctor’s recommendation on a reliable reference book for Country Harping, then look no further than Charlie McCoy’s All-American Harp Solos (ISBN 0-7119-6680-x).

Word has it the book is currently out of print, but if you search long enough you can still find copies. Be forewarned, it includes a healthy dollop of schmaltz. But the good bits are very good.

Charlie paints from an eclectic palate; collectively his tunes provide a solid foundation of, and a great introduction to, country harp patterns.