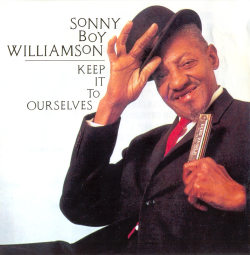 Don’t start me talking, I’ll tell you everything I know

Elwood reminded folks at the Harp Surgery it’s the anniversary of Sonny Boy II’s birthday this week. How about we tab out one of his monster tracks? he suggested. The Doc stroked his goatee and lifted his bowler down from the coat stand. No need to tab one number, young Elwood, we’ll do them ALL he replied. But how is that possible? quizzed Elwood.

The Doc raised a sagely eyebrow. Once you’ve mastered his trademark cross-harp licks and timing, my boy, you can tackle much of his material. Then it’s a case of studying the first position harp work, timing and tone. But always remember you will never sound exactly like the master, nor should you . Elwood started warming his favourite blues burger. So where do we begin? he asked. From the turn around, answered the Doc, it’s his signature lick. It goes like this…

Please come home to your Daddy, and explain yourself to me
Almost exclusively, Sonny Boy II played acoustic harp into a standing microphone, leaving him hands-free (at times quite literally) to add a wealth of expression to his playing. From behind the harp these effects are driven by tones which are thin and reedy one moment, deep and fully choked the next. To our detriment, we are often so preoccupied with nailing amplified Chicago harp that we turn our backs on other equally important styles. Sonny Boy reminds us there are plenty of other options which deliver an equally devastating payload. So let’s start with his signature lick. He uses it at the turnaround on a huge number of his songs. 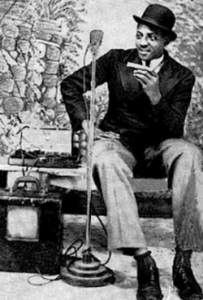 The signature turn around
The underlying rhythm is WAH wah-WAH wah-WAH wah-WAH wah-WAH-uh duh-WAH WAH. Try articulating it aloud. On the harp, each wah, accented or otherwise, is created with a precise opening of the hands. (For more information visit our Harp Skills Wah-Wah page). You must also learn how to choke the harp, using fully extended throat vibrato on the unbent draw 2 reed. All the control comes from the back of the throat and is anchored in the diaphragm. The end product is a ‘weeping’ harp. (For more information check out our Harp Skills Vibrato page).

Before we study the essential building blocks, here is an impression of the full effect using an Eb diatonic. See if you can copy it:

Now let’s analyse the key components, starting with the basic notes without any hand effects. Accenting the bold notes for the down beat, the tab looks like this: 2D 2D-2D 2D-2D 2D-2D 2D-2D-2D” 1D-1D 1D.

Remember that all the control comes from the back of the throat, with just a little help from the tongue around the 2D” stage (huddle-dah). Now let’s work on the throat vibrato. Using the basic note pattern, dig in and augment the entire phrase with full throat vibrato. The throatier the better, almost to the point of stalling the reed. This is what we mean by choking the harp – you can hear the throat pulls, or choking, in the background of this clip:

Now let’s add the hand effect to the note pattern. Each ‘wah’ is produced by opening the hands as the note is played. This lends a human speech quality to the sound. Once you’ve tried this part, go back to the first clip and try it again, combining all the components. 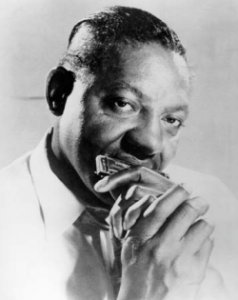 You gotta help me, I can’t do it all by myself
There are two licks on the classic track Help Me which are well worth learning. They are fundamentals of the Sonny Boy style and frequently appear in his recordings. One is straightforward, the other is not quite what it seems. Grab a Bb major diatonic if you have one, otherwise an A major will do (and you’ll be more popular with guitarists).

Here is a sound clip of the first lick. It starts with the basic notes 3D-4B-4D, then repeats them cleanly at tempo. Next with 4D changed to 4D and finally with 3D changed to 3D’. Now, somewhere between the last two lies the actual lick. The important point is while 4D is not a clean draw, neither is it a full bend. For this reason it is annotated askew and in bold. As the whole lick is played over the IV chord, 3 draw is also slightly bent for true ‘blues’ effect. If you don’t ‘blues’ everything up you’ll sound way too polite.Experiment, use the force, and work towards the optimum balance to emulate the master’s feel.

The finished lick is a triplet rotation 3D’..4B..4D, accenting the last note each time. Sonny Boy also uses it in Born Blind and Don’t Start Me Talking. It cuts in late in the Help Me track (at around 2:16) and it’s great for working those diaphragm muscles.

Now listen to the second lick. It uses the ‘2D‘ option first and the ‘3B‘ option second. In the 2D version you can detect the breath rolling across the bridge between holes 2 and 3. The 3B option avoids hole 2 entirely, so no ‘rollover’ effect, just a punchier push-pull staccato.

Logically, you might think the tab to this famous Help Me lick should be.. one 4D 4B 3D..2D..3D 4B..3B..4B 3D..2D..3D. The bold characters represent the downbeat. This facilitates a unidirectional ‘wobble’ between 4B..3B, and 3D..2D respectively. But is this accurate? Perhaps there’s an alternative. If so, what’s the Harp Surgery’s take on matters?

Subject to Sonny Boy telling us I did it like this, the following seems more expedient and more authentic. One 4D 4B 3D..3B..3D 4B..3B..4B 3D..3B..3D. It’s the second option in our clip, the one that avoids the 2 hole. This option lends itself to a more syncopated rhythm from the diaphragm and produces better staccato.

This little trickster has provoked a schism between 2D advocates and 3B partisans ever since it was recorded. Sonny Boy also uses it in Born Blind and Keep It To Yourself. In Help Me it appears at the 1:25 mark and once again it’s a repeated triplet played over the IV chord. You could play it anywhere in the song, but it will only sound authentic when you reproduce it over the IV chord. Make a mental note.

The other vital detail is the timing. The lick comes in after the down beat. So, in triplets, you count ‘one’-dah-dah dah-dah-dah dah-dah-dah dah-dah-dah. Rehearse and memorise this so you don’t get confused real time. The timing doesn’t come naturally to everyone straight away so be patient. Finally, remember to ‘blues up’ the 3 draw (3D, and 3D with the beat).

Please do me a favour, keep our business to yourself
There are another couple of classic licks which feature right at the end of Keep It To Yourself. They turn the rhythmic emphasis back onto the down beat and, in doing so, they stand out from the pack. At the same time they follow the chord changes, which ensures they sit perfectly with the musical flow. Here’s how it sounds when you put the first two parts together. We’re on a D major diatonic in cross harp.

Now let’s break this down into manageable building blocks. The first lick is played over the one chord. Here’s the tab and the corresponding sound clip.

The second lick is over the IV chord. Again here’s the tab and the corresponding clip. 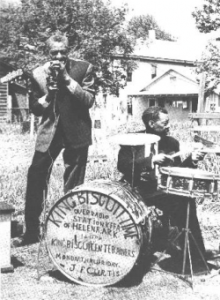 Now we can start hanging it all together. The first line is repeated as the song returns to the I chord. Next we add a simple bent 3D over the V chord and then move to the outro. In this number the band stops momentarily, allowing Sonny Boy time to fill the false ending with a passing phrase before slotting in a standard blues finish. The final notes are not played altogether cleanly – Sonny Boy catches adjacent holes for effect. Here’s the outro he uses:

Well done, you’re now ready to use this whole sequence whenever you like. You could use it at the very end of a song. You could also use it midway through, substituting the ending here with a standard turn around (above). Try the full sequence now, with the complete tab and sound clip here:

Hold up your head, and don’t let your conscience get you down
Pick up your C major diatonic and let’s hit this very basic, yet essential Sonny Boy II lick. It appears 26 seconds into Let Your Conscience Be Your Guide at the end of the first I chord sequence. Timing is essential. Basic as it is, you must ensure it punctuates the lyrics at the optimum moment: 2D 2B..1D..2B..2D 2D 2B..1D..2B..2D. Grab your C harp, it sounds likes this..

She asked me to wait until tomorrow, and she said everything would be alright 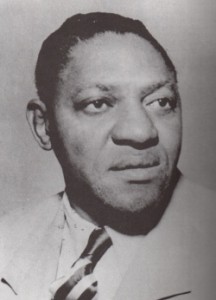 This is a line from Like Wolf where SB2 adopts the ‘sore-throat’ vocal style made famous by his brother in-law, Howlin’ Wolf. The number is also a great example of another essential aspect of Sonny Boy’s harp playing – his hand vibrato. In simple terms this is the quivering sound generated by rapid movement of the free hand. Keep the heel of your free hand anchored into the harp-holding hand, but flutter the fingertips as rapidly as you can. On a C harp, draw 4, draw 3 and draw 2, it sounds like this..

Another simple lick.
Here’s another typical lick (a wobble as we like to call it) that Sonny Boy uses over the IV chord. As ever, it involves a triplet pattern. The tab is one 3D’..2D..3D’ 2D 3D’. The rhythm is one dah-dah-dah duh duh and the result should sound like this..

More wobbles and elite syncopation
Here’s another Sonny Boy circuit over the I, IV and V chords. It is a further example of how he picks the twists, tucks and turns that nobody else thinks of. Add to this his visceral sense of syncopation and it is soon apparent why we’ve been celebrating his ingenuity for decades. Any harp will do, although the clip uses a C major. This time we’ll let you figure out the wah-wahs and hand flutters for yourself. The penultimate line of tab should be familiar by now; you just need to add the standard turn around lick to complete the exercise: 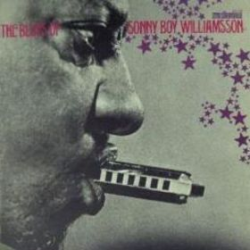 Out on the intro; somebody’s got to go.
Well done. We hope you’ve found everything helpful. Finally, now that we know about the turn around, playing over the I, IV and V chords and a couple of endings, it’s time we looked at how to start a Sonny Boy number! No better example than his intro to Don’t Start Me Talking (which makes a great ring tone for your mobile incidentally). Here’s the tab for the main part of the intro. All you have to do is add the wah-wahs and standard turn around. Enjoy.

Goodbye Little Girl
Hang on, I hear you say, I don’t recognise that Sonny Boy II title! And you’d be quite right. It’s a song by Gary Primich on his fabulous Botheration album. GP picks out some quintessential SB2 licks and weaves them into his song to the very best effect. Check it out and learn from it. Alternatively try Cross Your Heart by Lester Butler on the Red Devils album King King. And as a precursor to Sonny Boy’s phenomenal use of 1st position blues, grab a G harp and check out Kim Wilson’s rendition of Trust My Baby on his Tiger Man album. We’ll see you there another time.

Oh yeah, a couple more things: the best Sonny Boy II album ever? Try this one

! Meanwhile check out the Master right here playing Keep It To Yourself on a low D harp. Maybe the Doc was right about that trickster lick after all. This is where Sonny Boy actually spells it out for us beyond all reasonable doubt. I did it like this…