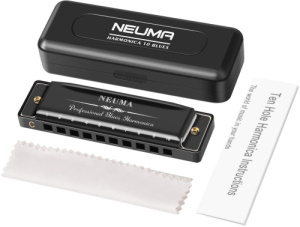 Putting your money where your mouth is

For a budget conscious harmonica shopper, there is an ever increasing range of cheap harmonicas available online. By budget we mean under £25.00 GBP/$35.00 USD. While the price may be attractive, there’s one home truth that cannot be denied: buy cheap, buy twice. A clean cut web page, some impressive blurb and a few sharp images can make any harp look great, but don’t be fooled.

Read the reviews and remember you’re more interested in how the harp sounds and plays than how great it looks. We’d also advise against buying used harps and grandpa’s cast-offs. Unless they’re for your personal museum collection, or you’re adept at restoration projects, these are best avoided too.

Caveat emptor
By way of example, one or two Harp Surgery students have recently bought a Neuma Harmonica 10 Blues in C online. It’s cheap, it’s readily available and it looks fabulous. However the price should instantly raise concerns; caveat emptor. Manufactured in China, we noticed the Neuma is identical to the Eastar Major Blues Harmonica we recently reviewed for Harp Academy. It’s pretty safe to assume they come from the same factory. The only real difference is the Neuma’s colour scheme is black and aimed at an adult market, while the Eastar’s is pink and probably aimed at a younger, female market. 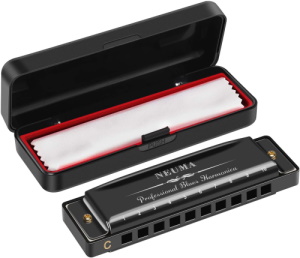 Depending on where you shop, you can find Neumas online for under £10.00 GBP. The harp’s advertising claims this is the excellent choice for kids, beginners or professional [sic]. In line with the price however, when it comes to music making this is a low grade instrument, which could very well put new players off learning harmonica altogether. It’s level of response is poor, particularly on the draw notes.

You get what you pay for
The Neuma comes in a clear plastic wrapper with the hard case visible inside. Inside the hard case is the harmonica itself, a small cleaning cloth and an instruction sheet. The instruction sheet is actually well thought out; it just needs an English-speaker to straighten out the grammar and idioms used. “Hold the harmonica with one hand, left and right hand will do, as long as you feel convenient can [sic]”

The harmonica sits comfortably in the mouth and the stainless steel cover plates have sealed ends. These are good exterior design features, but ultimately it’s the internal engine that counts. Neuma’s advertising maintains the small and exquisite harmonica features high hermeticity and the fully enclosed ends which minimises air leakage with surprisingly rich tone. We had to look hermiticity up in the dictionary; it means airtightness. This was not our experience when we played the instrument unfortunately, and judging by online reviews we’re not alone. The melody notes were leaky, hard to play and lacked any depth of tone. Draw 10 was completely unplayable. With some effort a reasonable result could be obtained, but it was hard work. Here are how the blow and draw notes sounded respectively: 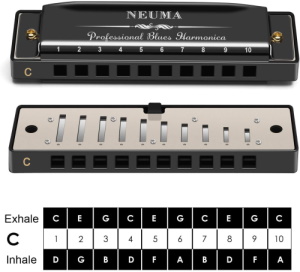 Proof of the pudding
Neuma’s marketing information says the harmonica generates a ‘smooth sound quality’. When we played the major arpeggio and scale the intonation was good and the notes correctly sequenced. The quality of the sound was pleasant, but hard work, especially on the draw notes. To the trained ear, a couple of notes appeared to be marginally off pitch and draw 12 was absent. Here are some more diagnostics: 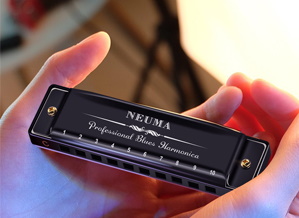 We then tested the harmonica to see if it was in tune with itself by playing pairs of octave notes. You can hear from the result that it was off pitch in places and dissonant. When it came to playing chords on the Major Blues Harmonica, things quickly began to unravel.

The blow chord in holes 1 to 4 worked, but the draw chord was poor quality and unsustainable owing to the combined leakiness of the holes. This is not an instrument for chugging or vamping. So, while the scale notes in holes 4 to 7 were acceptable when played in isolation, chord playing and interval pairing are poor options. 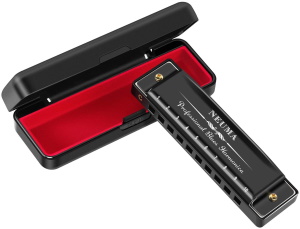 Outside the box
Looking into the breathing channels from the front of the harmonica, we noticed the same moulding feature that Eastar calls the ‘airflow splitter’. It’s a narrow band of plastic that runs laterally across the mid point of each chamber, creating a small shelf. Eastar claim this is conducive to maintaining stable airflow, making it easier for beginners to play smoothly and master bending skills more quickly. 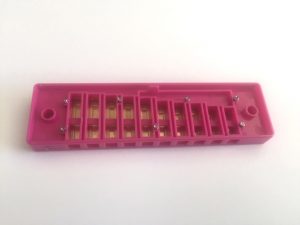 If this is the case, we are pretty sure other manufacturers would have adopted the feature long ago. It could be argued that placing anything in the breathing chamber will act as a breath inhibitor and is undesirable. Equally it could be that this is a residual feature of the comb’s plastic extrusion process, which saves on machining. Without further evidence our jury is still out on this detail.

Toy or instrument?
We were very disappointed and struggled to award the instrument two stars. It’s saving grace was the central melody notes of the major scale that played in tune, and the cover plates, which look nice. Nonetheless, this remains a budget harmonica. As with Eastar, Neuma could improve its product by employing someone who speaks English to launch an holistic overhaul of their written information; it’s appalling! Next they should quality control the tuning of the instrument. These two things alone would make their attractively designed instrument much more valuable to entry level harmonica players. Without them, it remains a bargain bucket offering and probably perpetuates the harmonica’s reputation as a toy.

As with all things in life, you get what you pay for. This is not a harmonica for the serious player. Negative Eastar reviews say the harmonica’s cover plate screws quickly disconnect, that the harmonica breaks apart and it doesn’t last long. There’s every reason to assume the Neuma will suffer the same disadvantages, as it’s clearly produced by the same manufacturer.

What the people say
In the interest of balance, you will find positive reviews of the Neuma harmonica online. Who placed the reviews, and whether the reviewers are seasoned players is impossible to tell. All we can say is you have been warned, so don’t be surprised if your purchase doesn’t match up to expectations. Here is some online feedback to support our findings:

“…allows in way too much air both when drawing and blowing which makes getting tones to sound right next to impossible, you get what you pay for and this was cheap, spend a little more and get something constructed better.”

“…does sound slightly off-key. I would advise not buying this one.”

“This Harmonica looks nice for a cheap harmonica, however I have been playing harmonica for years and this one isn’t good, the reeds rattle on lower notes 3 + 4 and the higher notes pretty much don’t work despite following the guidelines of how to break a new harmonica in, as most responsible harmonica players would, as so not to damage the reeds until they settle down. Out of all the harmonicas i have in my collection, this one i would say needs to be banned. It’s a very bad instrument and I feel like I have been robbed of a tenner.”

“The Reed plate is riveted into the comb badly and the reeds have massive gaps around them. Nothing more than a paper weight.”

“It’s really poor quality sounding as I play blues, and it’s hard to hit the notes. Not impressed by it, sorry.“