Well, there you have it. This delightful patchwork of essays, scatter shot and rapid-fire in their wisdom, chronicles Gussow’s journey to becoming a master – and he’s crammed in every titbit of wisdom accrued along the way. It’s like a little street manual on how to graduate from your apprenticeship and start the sometimes weary trudge towards mastery. There are threads on blues culture, threads on jam session etiquette and ‘sitting in’, threads on blues history and blues future. And the result is a palimpsest which, when held up to the light, might just give us new ways to understand ourselves.

I’ve not read Mister Satan’s Apprentice. It’s been out of print since long before I started learning harp. [And according to a recent email from Amazon the reprint is delayed ‘til sometime between Nov ‘09 and Jan ’10.UPDATE: publication date is November 20th. Pre-order here

.] Pity, because Journeyman’s Road would best be reviewed with an eye on Mister Satan’s Apprentice, but bear with me.

“If Journeyman’s Road has a theme,” writes Gussow, “it’s the complexity of the dance and depth of the search that marks the blues performer’s chosen path.” The bulk of this is made up columns penned for Blues Access magazine between 1996 and 1999, but there are a few academic papers towards the end, and I’ll get to those later.

The book, like this review, is split into two parts [watch out for second installment in the coming days]. First “Walking The Walk”, the memoir section. Here he writes about working his way up as a street musician, building on and filling in the gaps of Mister Satan’s Apprentice (which was written before Mister Satan’s nervous breakdown, their separation and eventual reunion). He also writes extensively about the New York blues scene and profiles many of the key figures thereof. He delivers a requiem for the now-closed Dan Lynch bar, whose Saturday-Sunday jam sessions were Blues HQ back in the day.

The ‘New York Blues Scene’ segments may seem a little parochial to readers who aren’t from the States and I found myself skimming the pages. However, Gussow finds the groove once again with a series of essays grouped under the title ‘Breakdowns And Revivals’: about his estrangement with Mr Satan, about the road to spiritual restoration after his heart gave out and really about finding a way to heal New York City after 9/11.

Perhaps he has a weakness for hyperbole. You could even say his earlier columns sometimes lapse into purple prose (hey, this from the guy who coined the phrase “delightful, scatter shot, rapid-fire, patchwork”). And yet when he writes in the groove, he can conjure better than anyone that deep, chest-swelling desire that all young blues players feel in their heart – a feeling that you can’t know until you burn to play the blues, until your yearning is so strong it threatens to choke you. So sometimes his hyperbole nails it, because the emotions he articulates are themselves hyperbolic.

You may see what I mean when you read the section where he describes his trip to a blues festival in Senegal. Confronted with the vast stretch of blue ocean whence African slaves were transported — the “Middle Passage” — his eyes start to well up.

I’d been in Europe a half-dozen times, but I’d never seen the broad body of the Atlantic from this side. It’s a long, long way across, I thought… I’d read much about the Middle Passage, as white American academics who teach African American literature do. But I hadn’t felt the Middle Passage, as a human proposition about an impossibly painful displacement, until that moment. 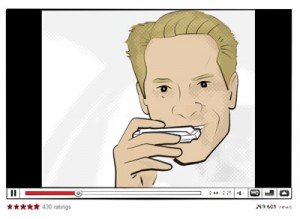 Ooh. There it goes again, a shiver. The last time I felt this faint choked-up feeling, I’d just watched the trailer to the forthcoming Satan & Adam documentary.

In short, this is not a self-indulgent homage-to-me autobiography. This is a smart, incisive and dynamic study of blues lives, and if you want to understand how to live one yourself — indeed, to understand what a blues life is at all — you’d do well to get a copy for your bookshelf. Gussow’s a guy who knows what it’s all about, and he wants to share it with us. But you already knew that, didn’t you? So get the book, dummy!

Stay tuned for Part 2 review of Journeyman’s Road, because the second half of the book (“Talking the Talk”) is where he’s hidden the really good $#!t…