Here’s his first question: do you tongue-block or lip-purse, and does that sort of technical question interest you or bore you?
SoD: Tongue block, now stop boring me. 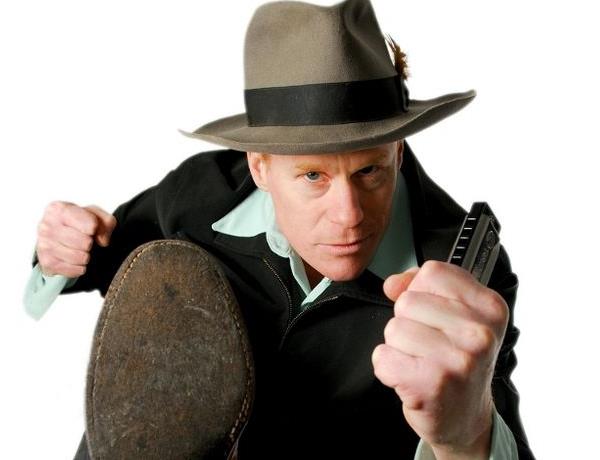 No, I’m being flippant. I think it’s cool that Adam Gussow guy is asking me a question, cos he’s a super-great player. I found myself kind of high once and watching his little instructional videos and realising just how little I know. You know, the last thing I learned on harmonica was when I was 18 years old from a book. We didn’t have YouTube back then. I’ve never tried to comp my licks off records, it’s only just been playing with bands live or just soaking it up and it finds its way out again. A year ago, a million little warbley things and note scaley noodley stuff, and positions – tons of that stuff that I don’t know. I’m not really a very clever harp player, I do what I do. I mostly play power chords and the occasional little run, but soloing to me is a chore.

Well, you’ve got no one to back you up, right?
SoD: But even if I play with a band it’s a chore. They’ll give me over once maybe twice in a 12-bar progression, and then just please leave me alone, y’know. Don’t look at me anymore because I don’t have very many licks. I really don’t. So a guy like that who can play like hell, I really admire it.

Another reader asks: Did you come to a point in your career as a harp player where you consciously decided to break away from what other players were doing, with your own distinct sound?
SoD: No. I actually didn’t. That’s just how I’ve always played.

I’m interested that you’re not that big on innovation…
SoD: [When it comes to innovation] you just have to judge it musically and sonically and emotionally. Is it doing something new that’s good? The reason that nobody really likes any innovators is that mostly innovators, uh, suck. It creates a bizarre or modern emotion that isn’t timeless. All I’m doing is kind of making it simpler and making it grunt, so I’m not really adding anything modern to it..

Were there any players who inspired your approach? Do you have influences?
SoD: …

Aside from Adam Gussow obviously.
SoD: Hey, I said I was ‘inspired’ one night. I get ‘inspired’ a lot. I’m going to get ‘inspired’ tonight after I do this concert. I don’t know if I had harmonica-playing heroes. When I was young I liked James Cotton, I heard him play at a festival in Winnipeg, Canada. But I don’t think there’s anyone else I found myself copying or sounding like. But you know, lots of heroes I guess.

Do you have to keep the sunglasses on? Is it a chore to have to wear sunglasses at night?
[I have to say, in Son of Dave’s defence, he did offer to take the shades off when I sat down with him. I waived the right. “Just trying to be friendly,” he said.]

SoD: It is a chore! It’s very difficult to wear sunglasses at night. I’m at work so I put on my sunglasses. But if I go out with my granny for tea, I won’t wear those sunglasses indoors at night. But frankly, if you wear sunglasses… I have to sit here and eat, and there are people who came here to see me, and they’ll feel less likely to come up and say things or ask questions. So the sunglasses are definitely self-defence, and it keeps everybody happy.

Some of our readers wanted to know if you were planning a US tour at any time?
SoD: I always plan it and then it doesn’t happen for some reason. I’m busy over here! I don’t tour for months in a row, and to do the states properly you have to go and do at least a month, and then come back and then go back in four or five months and then do another. Every time we think we’re going to do that, something comes in and interrupts that process.

And it’s also just a fucking, it’s just ridiculous there. Isn’t it?

Well, it depends what you mean…
SoD: It’s a ridiculous, ridiculous place. They don’t make things, they buy them. Everything’s made in other parts of the world and shipped there. It’s the first time in humanity that’s happened.[…]Well, they make cars – what else do they make? They don’t make furniture or clothes or tools…

Some of them make harmonicas –
SoD: Some of them do make harmonicas. Well, they design the harmonicas and then they’re made in China [Not exclusively – Ed]. So America’s a very, very weird place. It’s depressing to me in a way, to see so many happy upbeat positive people having to live through these really obvious problems. And it’s not like drought or war, it’s just problems that could be fixed. They don’t make Levi’s jeans in America anymore. It’s just fucking crazy. A country that size, with that huge a population and that much wealth penny-pinching and basically developing the rest of the world. Then watch them grow more and more depressed and religiously fanatic and soulless and bizarre.

And yet aesthetically the music you’re playing is derived from American music. You say you have no influences, which I respect totally, but this is American music you’re playing.
SoD: Well, it was a very different place in the 50s, most of these rhythms and notes and scales and ideas and slang and all of that… and then they started rehashing things in the 60s, 70s, 80s, they started going over the same old ground. Some new movements. Same with the architecture. It’s the decline of an empire. It’s why I moved to England. It gave me a sense of timelessness, or permanence. I’m not going to be something that’s a dying fad. Celebrate something that’s permanent.

So that’s a ‘no’ on the US tour?
SoD: Ha! No, I hope to be going to the United State, entertaining a lot of very nice people in some beautiful places next Autumn. But still not confirmed. 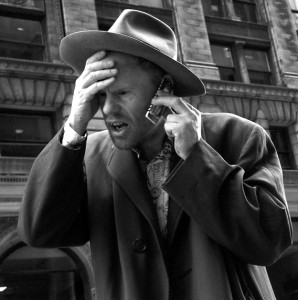 How do you create your song ideas?
SoD: It’s always a rhythm and a hook first. Am I in a jolly mood? Am I in a frisky mood? It’s just like a DJ or if you got a big record collection: if you put on one song, what’s it going to be? Am I in the mood for something that goes boom sikka boomboom sikka? Then I’ll start with that in mind, just start grunting something out. And then lo and behold a hook arrives. Then some power chord riff, and that seems to tell me what kind of thing to shout over top of it. It’s either going to be angry, or sexy, or it’s going to be sad or will it be about drinking? Will it be about taking your kid swimming or something?

About taking your kid swimming? I haven’t heard that one.
SoD: Yeah, there are some rhythms that are, uh, good for that. I just try to avoid the 12-bar blues because, you know, I can’t programme it on my fucking pedal!

And if they create a pedal that’s smart enough to programme multichord songs, will you go back to 12-bar progressions?
SoD: Nah, I’m pretty slow to evolve so I might not even get that pedal even if they invent it. I’ll just keep on doing what I’m doing, which is working.

Was that tough to work out at first and coordinate?
SoD: Each new tune is a bit of a tongue twister. But it’s really not complicated, it came very naturally. I’ve never been interested in beat box for its hiphoppedness. Why would you want to imitate a drum machine? It’s a human imitating a machine? That’s fucking weird.

I prefer it to a machine imitating a human...
SoD: I don’t want to sound exactly like a set of drums either. I want to sound like a human.

Reminds me of Tom Waits’ beatboxing.
SoD: Meh. I was first. I respect what he does but I’m not into it personally. I find his voice a bit challenging to listen to. Very heavily stylised.

That’s kind of the pot calling the kettle black, isn’t it?
SoD: What? I sing nice and sweetly don’t I? I do! Sometimes.

So who do you hate most in music? Am I allowed to ask that?
SoD: Oh Jesus. Well, it’s got to be one of the big popstars, doesn’t it?

Well, you can hate on the guy playing around the corner in some tiny little bar for thirty years, but that’d be kicking a guy when he’s down. It’s better to hate someone who’s won a Grammy.
SoD: Yeah, that’s right. Some working man, I might not be able to listen to it because I find it so painfully awful but I’m not going to put him down. The one that makes millions and takes awards for cranking out shit, however…
Ooh, what was her name? The person I really hate is Katy Perry: ‘I Kissed A Girl And I Liked It’. Wow, what a cynical piece of shit! Sooo calculated to make money. You know, really: “What can we put in a song that will sell? A little bit of lesbianism! Yeah, that’ll work!”
You know the other thing that makes people go, “Oooh, that’s a bit naughty! I’ll buy it!” is sexy schoolgirls, right? What else is there? Uh, maybe nun-raping. Give it four or five years, they’ll have the nun-raping song. It’ll be a super hit.

Son of Dave’s new album, Shake a Bone, is out now. This is part of the Harp Surgery’s Apprenticeship Blog with Murray.