How Do They Do That?
April 20, 2010January 18, 2016 Wilf 38 Comments Beatles harmonica, From Me To You, I Should Have Known Better, John Lennon harmonica, Please Please Me 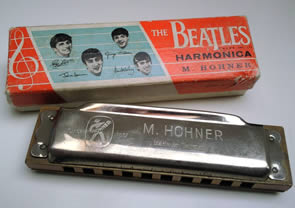 To the toppermost of the poppermost

Further to our harmonica study of Love Me Do, we should now take a further look at John Lennon’s harmonica recordings with the Beatles.

Not including the harmonica quartet on Sergeant Pepper’s For The Benefit Of Mr.Kite, we have identified at least a dozen Beatles tracks that feature harmonica. To be brutal, most of these are either ‘minor’ pieces from the band’s catalogue or else examples of Lennon’s harmonica work in its unaccomplished state. Rocky Racoon or Little Child for instance have particularly ‘unsophisticated’ harmonica parts. On I’ll Get You, the harmonica is badly out of tune.

What quickly becomes apparent is that John Lennon’s melodic use of the Chromatic harmonica was probably more comfortable than his diatonic work. With the Chromatic he could skilfully sidestep the need for reed bending on the short harp, which was not something he had yet mastered in the early 1960’s. We’ve chosen to help you nail three tunes where John Lennon’s harp lines feature most strongly.. END_OF_DOCUMENT_TOKEN_TO_BE_REPLACED