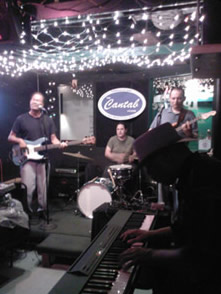 According to the logo, The Cantab Lounge was established in 1938. Don’t ask who by or what for, but do take it as read that this is Boston’s answer to Chicago’s Rosa’s Lounge. A 15 minute taxi ride from downtown Boston took the Good Doctor across the Charles River and into Cambridge, with MIT and Harvard keeping a watchful eye on his progress. Cruising up Mass Ave towards Central Square, he soon saw the Cantab lights and the billboard advertising music 7 nights a week.

Tuesday’s at The Cantab is Bluegrass nite. Judging by the literature, one sniff of harpoonery and you’d be invited to fall on your tin sandwich by the hillbilly praetorian guard. Other nights boast blues, jazz and rock (plus a poetry ‘slam’ in the bar downstairs), BUT… every Wednesday and Sunday night at 9pm is Candy’s Blues, Jazz and Rock Jam. And it’s free. Now that’s more like it.

The Good Doctor arrived on a Wednesday evening, complete with Chicago Toolkit and a pocket full of green beer tokens. He walked right in, autographed the guest list and took a seat at the bar, no messing. He asked round for Candy. Turned out Candy was a he, and was already on stage playing guitar leading the house band. A Heineken was hastily ordered. END_OF_DOCUMENT_TOKEN_TO_BE_REPLACED