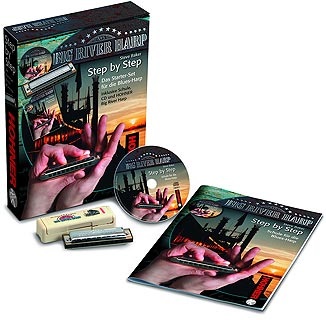 As regular visitors to the Surgery will know, we hold immense respect for the work Steve Baker does in harmonica education and as a consultant to Hohner harmonicas. Having proudly hosted Steve at our Harpin’ By The Sea Festival in 2013, we recently stumbled upon his Step by Step module for blues harp beginners. Ever curious, we duly purchased a copy so we could take a good look under the hood. Here’s what we found.

Where can you get a copy? Amazon occasionally has stock of Steve’s Step By Step Blues Harp Course, and no doubt you’ll find copies on eBay. We recommend you go straight to Steve’s own website, where you can buy it on line for €46.00. That’s currently about £35.50 GBP, or $51.00 USD, plus shipping (it wasn’t any cheaper on eBay).

The course comes in a large, colourful display box, with an attractive Mississippi paddle steamer theme and Big River Harp logo. It contains a Big River harp in C major, a play along CD and the Blues Harp Course book. The packaging is a little bulky for what is

actually inside, however we like the fact that no plastics are involved, so the entire packaging unit can be recycled.

The motif on the inside fascia reads Welcome to the Blues, and this is what the course is all about. It’s designed to introduce a beginner blues player to the early stages of the Mississippi Blues Sound, and all in Steve Baker’s safe hands. All exercises in the book were recorded by Steve and can be heard on the CD, with lovely acoustic guitar accompaniment from Dick Bird. The backing tracks are also found as playbacks without harp, to facilitate practising. This is something so many tutorial packages forget about, so well done Steve!

The choice of the Big River harp is a shrewd one. Beginners are not fobbed off with a cheap, leaky instrument. The Big River is a quality harp with an even response, clarity of tone and easy maintenance. Indeed, if anyone asks the Harp Surgery team which harp to start out on, we’ll normally steer them to the Big River as it’s such a reliable workhorse, for such an inexpensive outlay. 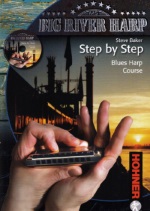 Steve’s tutorial is set out across 7 chapters, the first of which takes us through the C major scale and into chordal playing and our first tune. Steve has chosen Shneeflöckchen (the little snow flake) for this. It makes a nice change to the ubiquitous Amazing Grace, and Camptown Races, even if it’s a melody that won’t immediately be familiar to those outside German-speaking Europe. But newcomers will quickly pick it up from the accompanying CD.

Chapter 2 introduces single note playing and the options of tongue blocking and puckering. Both are demonstrated on the CD. The tongue blocking section also introduces the concept of tongue slaps. This is often viewed as an intermediate or advanced technique, but there’s no harm in exposing beginners to it early on. The standard handhold position is covered next, along with breath control. Steve touches on air-tight tone and clear intonation rather nicely, encouraging new players to listen closely to what they are playing. The vocal tract and how throat position promotes good resonance is also explained thoroughly. Steve then works through the notes in holes 4, 5 and 6, before smuggling in 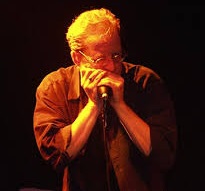 the concept of modal, or positional, playing from 4D, giving the key of D minor on a C major harp. Drunken Sailor in D minor closes the chapter, with a great, folk-guitar playback track.

Chapter 3 moves into the concept of cross harp and note bending for blues. Double Stops are included, with a section on train whistles and articulation; this is Steve’s prelude to note bending. Newcomers will have fun playing steam engines, while learning to alter the pitch of their target notes too! Using the draw chord (rather than blow chord) as the tonic follows next and Steve looks into the tension and resolution of cross harp chord playing. Learners will find the closing Piedmont flavoured train exercise very satisfying.

Chapter 4 asks the question What is Blues? Steve’s answer is concise and to the point. He then introduces the 12 bar chord sequence. Vocal blues traditions and song structure are considered, and Steve introduces the concept of the tonic, sub-dominant and dominant chord structure. These are heavy theoretical terms for any newcomer to music, but it’s good to initiate the format with the correct terminology. Two useful cross harp blues exercises follow and Steve closes the chapter by introducing blue notes and explaining how they link into note bending.

Chapter 5 zeroes in on scales and addresses the perennial issue of 2D playing off-pitch for newcomers. Steve’s solution is enlightening; it’s all in the whistle! The importance of the 2D root note for cross harp playing is 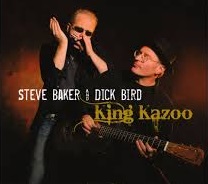 then examined and a variety of exercises reinforce this very important concept. As an aside, we did spot a typo on the music stave graphic for exercise 1, where the fourth note indicates F (5D); this should be E (5B). The backing track demonstrates the correct pentatonic sequence.

Chapter 6 looks at harp rhythms using repeat notes. The first example is I Should Have Known Better by the Beatles. Steve then covers Detroit Boogie timing and the standard cross harp Shuffle. He also keeps an eye on tone and how blues players roughen up their sound.

The final section, Chapter 7, moves into note bending. Steve covers the where and why first, then he tackles the difficult lesson of how. He explains the need to anticipate each bent note by positioning the vocal tract accordingly and then works on the 1D’ bend, and the 4D’ and 6D’ bends. Unfortunately this is where everything finishes. The final tune is one that newcomers will probably find complex; it’s fast and includes

hand wah-wah’s, which aren’t really explained in the text. Aside from the small chart on the preceding page, there is also no explanation of the remaining draw and blow bends, how to achieve them, or how best to utilise them. This might help to round the job off more neatly.

The inside track
Step by Step is a good introduction to blues harp playing and it’s been professionally put together. The text is very user-friendly. My lingering worry is that, by the end of the book, the beginner will be left with only half the picture on bending, or frustrated by the final number. I think blues newcomers should be introduced to the full range of bends, how they differ, where they are best employed and then equipped with the blues scales in the first three positions. There’s is a danger with Step by Step that 2nd position cross harp will be viewed as the only way forward, and holes 2 to 6 will cure all ills.

How do you produce a perfectly balance introduction to the blues? We’re still trying down here at the Surgery! I guess you can’t, but perhaps a follow up Step by Step Part 2 is called for; maybe with the opportunity for Hohner to market another of their excellent harmonica models.