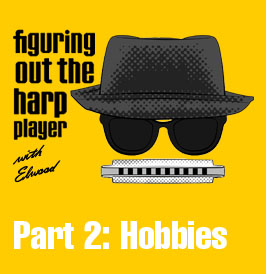 So, you still want to be a harp player, huh? Well son, every creature has its hobbies, and if you want to pass yourself off as the real thing, you better learn how to blend in. In Part 2 of his ethnoblography, Figuring Out The Harp Player, Elwood sketches out a few key points.

It is an established fact that over 98 percent of harmonica players are white, English-speaking men between the ages of 30 and 65. (The other two percent are women and Ismael Lo.) When they are not sleeping, eating or trying on ugly hats, they typically divide their time between four activities:

1. Wishing someone would “bring back” eight-track tapes.

3. Dreaming of a parallel universe in which Little Walter lives to be 100 and becomes President of the United States of America. Every week instead of giving fireside chats on the radio like Roosevelt, he broadcasts a profane half hour of tips and tricks for the harmonica-playing nation. It would be like Adam Gussow’s YouTube channel but, you know, more presidential. Probably a little more hooched-up, too.

In addition to this – but perhaps not important enough to merit a place on the list – harmonica players will also spend a few minutes each week practising scales and the four-hole bend. If they can find time, that is.

4 thoughts on “Four Things (Nearly) Every Harp Player Does”