I once had a whim and I had to obey it

Welcome to part two of our Baroque Blues Harp trilogy. The headline might look rather daunting, but don’t be put off. This is a piece we have all heard at one time or another and, once you’ve heard it again, I am sure it will bring a reassured smile to your face. Written in 1786, it is the final movement from the last of Mozart’s four horn concertos. The concertos were composed for his close friend Joseph Leutgeb a master horn player of the period. This finale is written in 6/8 time as a chasse or hunting tune. Consequently there is frequent use of triads in the melody to give a hunting horn flavour and triplet phrasing for a galop effect. 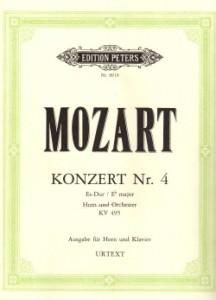 To sound my horn, I had to develop my embouchure

The modern valved French Horn would not be invented for another twenty years and so Mozart’s concertos were performed on the Natural or Waldhorn. His score demands good use of technique. By altering the purse of the lips, the embouchure, a horn player can readily produce the notes in a harmonic series. But on the Waldhorn additional sharpened and flattened notes require a combination of note bending by further changes to the embouchure and alteration of the hand stop position in the open end of the instrument. Rapid note repetition, trills and tonguing embellishments are also features of Mozart’s direction for the soloist.

So why would I attempt this on the harmonica?

Primarily because it’s a great tune and it is very satisfying when mastered. It makes for an arresting party piece, as does any classical music played well on a ‘simple’ diatonic harmonica. People just don’t expect it. Initially they will enjoy the comic effect, but they will soon appreciate the musical accomplishment too. Secondly it will help with your movement around the harmonica. You will need to master repeated notes using glottal stops, as well as new patterns and combinations not normally found in blues, folk or country music.

The obvious place to start is 1st position on an Eb major diatonic. In which case the signature opening and the phrase that follows fit very nicely. A low Eb might be a better choice for executing the lower bends midway through the piece. Your 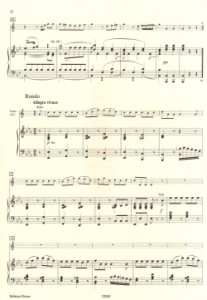 regular Eb will do fine, but it can be tight in places, particularly around the draw bends in hole 3. For the intermediate player, problems lurk in the third and subsequent phrases where an A natural is needed. Equipped with regular draw and blow bends only, an A natural is found either on the first draw bend in hole 2, or on the blow bend in hole 9. Neither of which lend themselves to the flow of the melody as they entail jumping whole registers to locate the required note, which also interrupts the phrasing. Ideally you want to be moving around holes 4, 5 and 6, which means using the 5 overblow (5B+) for that elusive A natural. If this is outside your bailiwick, then you might consider retuning your draw 5 reed up a semitone. You would still be able to play Ab, but now it would be the draw bend in hole 5. Alternatively..

Switching to Lee Oskar Melody Makers is another solution as these already have draw 5 retuned for you. As Melody Makers only come in 5 keys however, none of which is Eb major, you will have to change key. As would your orchestra! In which case, the ‘A’ Melody Maker takes things down half a tone. Before you get more confused, Melody Makers are actually designed for cross harp (2nd position) playing, and labeled accordingly. So an A major Melody Maker does give you D major in 1st position. There is another important difference when using a Melody Maker, of which you need to be aware. 3 blow is tuned up a tone. No worries, you still have draw 2 as back up, but you will have to revise your patterns.

When listening to the full recording (above), be aware that the orchestra also includes horns. Sometimes it is difficult to distinguish these from the soloist. The following solo tab has been prepared direct form the sheet music for accuracy.

Here is the Eb diatonic 1st position tab with 5 hole overblow (5B+) and lower register alternative.

and back to main melody….

And just for fun, here’s the ‘rap’ version of Horn Concerto No.4 by latter day Music Hall, TV and Radio stars Michael Flanders and Donald Swann. They named the piece Ill Wind.