We continue with the Harmonica Microphones series with some thoughts on the knotty problem of microphone feedback: what it is and how to minimise it.

Feedback is that awful loud screeching, humming and/or whistling sound a system makes when a microphone picks up the sound from the amplifier’s speaker and sends it back to the amplifier for further amplification. Every system (in this case a microphone plus amplifier) has a feedback threshold. Turn the volume up loud enough and feedback occurs. Keep the volume below that point and it doesn’t. Unfortunately we often need to have our volume very close to the feedback threshold in order to be loud enough, and so feedback can come and go as conditions change. But some setups are less prone to feedback than others, and some microphones are less prone than others.

What can be done about feedback? 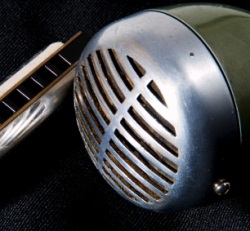 Believe it or not, microphone choice is not very important. Many players believe one microphone is more sensitive to feedback than another, only because that microphone is louder/hotter/more sensitive than another. The only “fair” way to judge one mic vs. another is to adjust the amplifier’s volume so that the sound out of the speakers is equally loud from mic A to mic B, and then see which one more readily produces feedback.

Vocal mics and instrument mics are designed to be “directional” – to pick up more sound from the front than from the sides or the rear, specifically to help avoid feedback on stage. So a well designed microphone can help with a feedback problem – but only when it is in free air – in a rack or on a stand, and not in your hands. Once you pick up a microphone and cup it, all bets are off. If you hand hold a mic, feedback will be more of an issue because the mic is moving around and facing different directions. When you move your “cup” away from your face, it can act like a satellite dish and can catch and reflect more sound to the mic than if it was in truly free air. Your hands also destroy a good deal of the directionality designed into the mic. Many players learn to manage this by pressing the face of the mic against their chest while not playing. Ideally, you should be set up just a little further from “the hairy edge” of feedback so it isn’t too difficult to manage.

When you play acoustically, you can help to control feedback by ensuring that little to none of your sound is coming through the monitors. Depending on the frequency of the feedback, equalization (tone control) can help as well. When you’re playing amplified, all of the above applies. However the gain of your amplifier is the most important variable in taming a specific system. A microphone is designed specifically to pick up sound waves from the air, so it is a much more sensitive and troublesome feedback device than a guitar string. Consequently guitar amplifiers (and most harp amps start out as guitar amps) are set up with much more gain than we need. This allows the guitar player to get Hendrix-like feedback when he or she wants it, but it can be a nightmare for a harp player.

A change of mic might give you, at best, 1-2 dB more volume before feedback. A change of amp might be good for 10-15 dB, or even more. 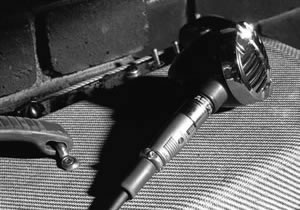 Generally you can’t adjust the gain of a solid state amplifier. However we can usually substitute lower gain tubes for higher gain ones in a tube amp’s preamp section – and this can instantly make an amp more harp friendly. The most popular preamp tunes are the 12A# series. A typical Fender guitar amp has three tubes in the pre-amp section, and all are 12AX7’s as the amp comes from the factory, set up for electric guitar. Here are the gain factors of the 12AX7 and its compatible cousins:

As you can see, three 12AX7’s creates a huge amount of gain. On an amp like this, you will likely not get the “normal” channel volume past 2 before feedback. If your amp has an “overdrive” channel it will be completely unusable. There are way too many combinations and permutations to describe here, but here is one recipe for success: On a Fender Bassman type amp with three preamp tubes, replace the two 12AX7’s closer to the amp’s center with 12AU7’s. This should make a significant difference. If it isn’t enough, replace the outer one with a 12AT7 or 5751. You should now be right in the ball park and grasp the concept – continue to experiment and pick what you like.

Although reducing the gain of your amp makes it more manageable, it will not perform miracles. A Fender Blues Jr. sounds ear-splittingly loud in your living room. Yet you get on stage at a jam and wonder why it can’t be heard. So you turn it up until it is feeding back and conclude that you have a feedback problem. But you don’t. You have an amplifier problem.

Get a bigger amp! 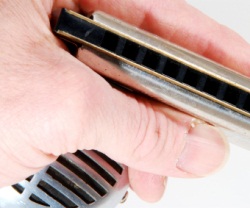 More power helps, but I’ll let you in on a little secret. More speakers is just as important, or more so. Compare the surface area of the speakers on different amps. A Blues Jr. is a 15 watt amp with a single 12” speaker – if you do your maths you’ll know it has 113 sq. in. of speaker surface area. My Sonny Jr. Cruncher is about 35 watts, and has a 12” and two 8” speakers. That’s 213.5 sq. in of speaker surface area – more than twice as much power and almost twice as much speaker area. But even that isn’t always loud enough at some of the jams I go to. I can get the volume on that amp to 9 with no feedback. If I want to be heard at a jam, I bring out the big guns. My Sonny Jr. Super Sonny amp has about 50 watts, and has four 10 inch speakers (here’s Sugar Ray Norcia using one to fine effect). A little more power, but another big jump in speaker surface area – 314 sq. inches to be exact. The difference is huge. Room filling volume, and again, no feedback!

Avoid “overdrive” amplifier channels or pedals: generally speaking these work by adding lots of gain and will be feedback nightmares. If you’re using a PA system and your amplifier is mic’d, tell the sound guy to take you out of the monitors completely. If you can’t hear yourself on stage, and getting closer to (or further from) your amp doesn’t help, have him sneak a tiny bit back in. Change where you stand. Turn the treble or mid-range down. Use an “anti-feedback” pedal. If none of that cures your feedback problem, you are simply asking more of your amp than it can deliver. The bigger the amp and the more speakers it has, the more likely it is that you can get good volume before feedback, regardless of which mic you choose!

And finally, get a volume control! There is nothing worse than getting everything all set during sound check, and then encountering feedback during your performance. But this happens all the time, because room conditions change for a variety of reasons (the sound man included). You certainly don’t want to have to dive for your amp to adjust it, knowing the feedback problem will be worse when you get closer. A volume control at the mic is the perfect solution to this problem. You can instantly kill feedback from where you stand just by lowering the volume a bit. When you perform, you often can’t be sure where the feedback is coming from, and a volume control tells you whether it is you or not.

Volume controls are useful tools even if feedback isn’t an issue. Although any good player has good dynamic control over his instrument, there can still be a wider dynamic range in your playing and with the band than you can accommodate merely by playing softer. Being able to back the volume off right at the mic is really nice when you’re comping behind a quiet passage in the music. You can also use a volume control to explore the tonal range of your amp, when otherwise you’d be firmly in feedback territory. An amp turned up to 10, with the mic’s volume controlled by you to remain below the feedback threshold, will sound different than the same amp at 6 with the volume control on the mic all the way up.

Feeling tied to the stage by your mic lead? We have the solution: for our last article in this series, we’ll be talking about going ‘wireless’.

3 thoughts on “Hey There, What’s That Sound? – Microphone Feedback”