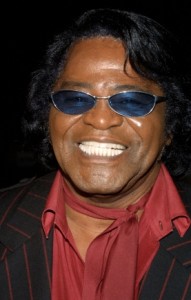 Funkin’ it up on the blues harmonica

What shall we play now? Well, as the late great James Brown put it, whatever we play, it’s got to be funky! Wise words from a guy who learned harmonica as a kid; as well as the guitar, drums, piano, and of course, some hefty vocals.

Harp players are – or should be – conscious of their scope for providing not only a horn line, but a whole horn section on the humble tin sandwich. By this I mean everything from a melody which might otherwise be delivered by a single brass instrument, to a fanfare or complete horn-style fill. It’s all there waiting to be mined. So let’s dig deeper…

Many top harp players we’ve spoken to have said that listening to horn players had a massive influence on their own development. Gerry Portnoy said it, Magic Dick said it and Lee Oscar said it. And it’s widely documented that Little Walter himself was heavily influenced by the jump jive and jazz players of the day.

Harp players can borrow so many ideas from their brass cousins. The themes, the fills, the attack, the phrasing and the timing. I’m thinking Water Melon Man, I’m thinking Mozart’s Horn Concerto No.4 in Eb Major, I’m thinking Last Post, I’m thinking The Peter Gun Theme and at the moment, of course, I’m thinking James Brown.

Check out this simple trick. Pick up a 10 hole major diatonic in any key and sound these draw notes in sequence: 2D   3D   4D   5D   6D  Sound vaguely familiar?

The harp is telling us something here. It wants to get funky! You’ve just learned one of the key lines in James Brown’s I Feel Good (I Got You). It’s iconoc and it couldn’t be simpler. Now grab a G Major 10 hole diatonic and let’s carry on the journey.

The songs starts with the lyric Whooah! I feel good… And we instantly make like an air Saxophonist – thumb between our lips, humming the horn part that follows. Instead let’s grab our harmonica and make some noise, hitting the draw two (2D) and the full draw two bend (2D”):

Like I knew that I would garners the same horn response. Great! Now the lyric repeats while the song moves from the I chord (D major), up to the IV chord (G major). We have move with it and we need find the best fit to echo the next horn response:

An uncomfortable switch back and forth, but effective nonethless.

Feel good, feel good, I got you

I got you… and we’re back to where we started our tab:

When I hold you in my arms

Then we have to emulate that beautifully exposed line; one that could so easily be the start of a separate jazz number. It goes like this, starting with an octave jump:

And don’t worry if the bend on draw three sounds slightly out at first. I don’t think the original hits the same note cleanly every time. Work it. Use you ears, your bending technique and your instincts to achieve the best match. Loosen up and work it some more.

My love won’t do you no harm

Now we move into a chordal horn section vamp, with a soul flavour and a crafty little addition. Hit the vamp, then wait to add the fill. You’re head will be telling you all kind of othehr stuff, but this is how it goes. Remember the old rule, less is more:

And back to the 2D..2D” response covered above. All you now need to do is work the changes as you move through the song. Until the end. Whereupon you repeat the octave hits a couple of times before looping around the blues scale:

And for the big finish, perhaps a 4D~5D trill or a modulating, trumpet-style, blow bend 9B  10B..10B’~  Well done, the Grand Funkmeister would be proud of you! Granted, the original has a second harmonic brass line that adds that edge to the horn part, but blast your delivery through a good valve amp and no-one will know the difference. Enjoy!