And let each one perform some part, To fill with joy the warrior’s heart.. Louis Lambert

Applying the circle of 5ths to a C Major diatonic harmonica enables us to determine the alternative keys and their associated positions that are available on the same harp. As a reminder:

4th position is in A minor. Your root note is generally draw 6. 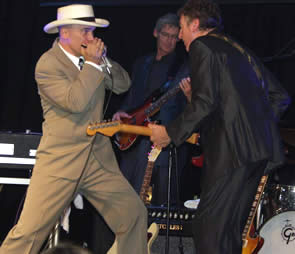 The first three are the most widely used positions on the harmonica. In each case it is helpful if we can find a well known melody that best demonstrates that position and will map out the principle safe notes for us. In first position the choice is limitless. The most often used melodies are Camptown Races, Oh Susannah, When The Saints Come Marching In and Amazing Grace. In second position the choice is also very wide, especially when we start to use bent notes. In third position the melody to Scarborough Fair is the best example I have come across. You can also try What Shall We Do With A Drunken Sailor or even the theme to the Hawaii 5-O TV series. For mapping out fourth position, try When Johnny Comes Marching Home.

For the bluesers amongst you, the A minor blues scale can be found here: