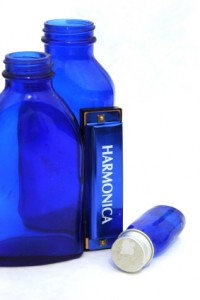 ..The Dormouse had closed its eyes by this time, and was going off into a doze; but, on being pinched by the Hatter, it woke up again with a little shriek, and went on: “—that begins with an M.. (Alice In Wonderland – Lewis Carroll)

Why is it the slightest hint of the M word triggers narcolepsy in harmonica players? We smile wistfully, we nod politely, then we glaze over and let everything entering one ear pass straight out of the other. In fact the quicker, the better – we’ve enough trouble in our day already. Basically, talk of modes never, ever, makes sense and a visit to the dentist for a double root canal filling would be infinitely more pleasurable. Aren’t modes what jazzers do? We play blues, and blues comes from the heart right? Well, listen up and listen good – WRONG! Here’s how it all works..

From a position of musical knowledge, modes enable us to build on what we’re already doing. Avoiding some of the more obvious musical bear traps, we can learn to deliver measured and original musical contributions instead of peddling our shabby line of harmonica guesswork. So if your playing has lost its mojo, messing around with modes and positional playing is probably the tonic you need.

Chromatic Scale
If we then added the black notes to the piano, it would become a chromatic keyboard, enabling us to ascend or descend in half note steps. If we did this between two C keys, the result would be:

That’s a thirteen note sequence. And, just in case you’re wondering, yes C# is the same note as Db on a chromatic keyboard. This aspect of musical theory is called enharmonics; two names for the same note. Knowing exactly how, and exactly when to use each, is theory for another day. On diatonic harmonicas, and on a bandstand however, you’ll normally hear the notes of the chromatic scale referred to as follows:

How to crack the modal code
Using only the white keys of the C major scale, we could experiment ascending and descending between any two like notes an octave apart; D to D, or E to E for example. If we follow this in sequence, starting with C, the result would be the chart below. Play these lines up and down a few times and notice the change of character each one takes. 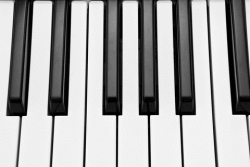 Now let’s analyse what’s happening by mapping out the musical steps we’re taking in each line. Referring to the piano keyboard will help us to picture what’s going on. We’ll call a whole tone step T and a half tone (or semi-tone) step s.

And this is almost all we need to know. Can you see how the semi-tone (half) steps shift to the left (down) each time we move up a note? This is what changes the ‘flavour‘ of each sequence you played 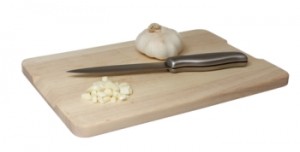 Name and shame
We’ve used the term ‘flavour‘ advisedly. We could have used ‘mood‘ but we don’t want to confuse this with mode, so we’ll stick with the cooking metaphor for now. In which case, just as we give each tone a name of the alphabet so that everyone understands which ingredient we’re using, so each of the diatonic dishes above, or modal scales, is given a name: 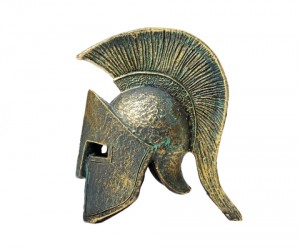 These are ancient Greek terms. The Greeks recognised the science, art and magic of music. Indeed, music was so highly regarded, they actually included it in the ancient Olympic Games. The Dorians were one of the four major Greek tribes that came from central Greece – they built temples with plane looking, or Doric, columns. Locrians were a minor tribe from north-west mainland Greece. Two of the other major Greek tribes were the Ionians who settled the Ionian seaboard in what is now Turkey, and the Aeolians, originally from Thessaly in mainland Greece. The Phrygian community was from Asia Minor (Turkey), as were the Lydians of Anatolia. Myxolydian means half, or almost, Lydian, and is a technical afterthought rather than a tribe of short stature

Philosophically Speaking
Relating each of the modal scales to parts of the known world made the ‘flavour‘ of the mode more meaningful to the listener. Today we might call Phrygian the Spanish or Moorish mode, Mixolydian the Scottish mode, Aeolian the Klezmer or Yiddish mode and Dorian the English Folk mode. Meanwhile, philosophers might describe the ‘feeling‘ or ‘mood-changing‘ effect of each mode in the following ways: 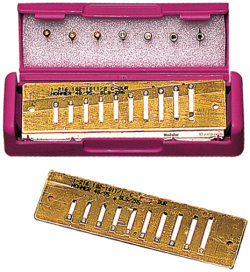 Getting real with it
Now that the underlying theory is clearer, one important question arises; what practical use is there for musical modes when playing the diatonic harmonica? The answer in one word is, lots! But first we have to translate everything into harmonica speak.

So to start with, it’s useful to equate each mode name to a standard key name, pick a useful root note (or start point for each key), and add a memorable tune as a blueprint for recalling the mode in a practical sense. Using a C major harmonica, our shortlist might look like this:

Running around in circles
To relate the concept of modes as close as possible to every-day, 10 hole diatonic harmonica playing, we have to embrace the next area of theory. It’s another one that causes eyes to glaze over; the circle of fifths (or positional playing). Relax – it’s really quite simple. And while we won’t go into anything in depth on this particular page, let’s gently set the ball rolling using a C harp.

We know we can play any number of straight harp tunes, including When The Saints Go Marching In, from 4B right? We also know this is called 1st Position. But to put it politely, these tunes can soon become pedestrian. We want to rock it up! So we turn to 2D as our root and range up and down between 2D and 6B. We then start to investigate draw bends.

As we do so, we’re probably aware that we’re playing cross harp in G. We also know this as 2nd Position. But let’s revisit what just happened for moment. To reach G from C, we’ve gone up 5 degrees, or major scale notes. If we want to use posh musical vocabulary, we can also call this a diatonic interval of 5. We’ve gone from C, through  D   E   F and up to  G in 5 steps. Remember that we include the root note of C as step 1 when we start counting. It’s like the working week from Monday to Friday – five days in all.

If we counted up another interval of 5 from G, we’d reach D and that would be Dorian mode. Hold up the fingers and thumb of either hand and double-check this: G  A  B  C  D. You just used your naturally patented, circle-of fifths, double-checking system. Take it with you whenever you play. By the way, to be absolutely accurate, we actually found D minor, but we’ll tackle the reasons behind this another time.

Position-wise, we can keep going round the circle of fifths until we return to C. In doing so, we will have covered all twelve degrees of the chromatic scale. I hear you asking how come, when 5 up from F brings us back to C? Fingers and thumb at the ready. Counting round in diatonic intervals steps of 5 would take us from C to G, G to D, D to A, A to E, E to B, B to F and finally from F to C. So you’re quite right.

This is the blueprint for all twelve positions on a C major diatonic harmonica. You can take this same 8 half-step formula and apply it to any major harmonica key to work out its corresponding twelve positional names. At the same time, you can confidently accept that you’ll coincide with the seven modes as you go (in bold above). The modal positions also happen to be the most practical of the twelve options available to diatonic harp players – 1st, 2nd, 3rd, 4th, 5th, 6th and 12th – as the root note is not always hidden in an inconvenient bend. Just to round things off, here are the 7 modes again with their root notes and corresponding position on the harmonica, again using a C major harp. 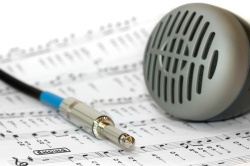 If any of this is page unclear, it’s probably because you’re human, or else you’ve been playing your harmonica instinctively. The message is, it’s time to start playing smart as well as hard, so review the information above and add it to your arsenal. We guarantee it will help shape you into a musician.  Very soon you’ll be surprising those who assumed you were ‘just another harp player’.