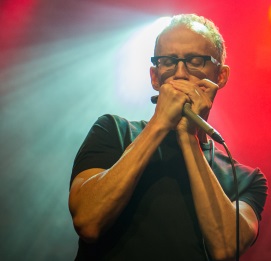 Down the road, came a Junco partner

The Harp Surgery was nearly ready for Christmas. Our Monica was vacuuming loose pine needles from under the Christmas Tree, while Shag-pile Jim clung to the step ladder, trying to unhitch himself from the top branches. ‘Looks like you’ve caught your ding-dong merrily on high Jimbo‘, the Doc chuckled. ‘Another comment like that Doc, and you’ll be replacing the Christmas Fairy,‘ Jim muttered.

‘Now, now Jim, ’tis the season to be jolly,‘ the Doc reminded him, ‘let me top up your Glühwein old boy…it’ll bring some colour to your cheeks.‘ The Doc nudged Monica and pointed at Jim’s builder’s cleavage. ‘Well how do you expect me to get the bloody Fairy up there?’ Jim moaned. ‘Have you tried bending?’ the Doc asked. ‘How’s that gonna help?’ Jim wailed. ‘Not you old boy, the tree.‘ The Doc was biting his lip.

Talking of bending, the Doc added, ‘I’ve just been chatting with Carlos del Junco. That man must eat soda crystals every time he plays harmonica.’ ‘What are you taking about?’ quizzed Monica. ‘Well he gets clean round every bend,‘ the Doc replied. His gag shot over Monica’s head like the Red Arrows at Farnborough Airshow.

For he was loaded as can be
The Doc knew that Otis, the mailman, was into Jazz just as much as he enjoyed the Blues. As a harp player, he was also a keen fan of Carlos del Junco’s style. Indeed, he’d often asked when the Doc would get round to a decent natter with Carlos. 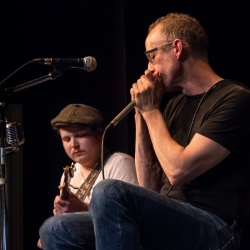 So when the opportunity arose, the Doc asked Otis to prepare twenty questions for the maestro. And being a good sort, Carlos duly took up the challenge..

Steve Tyler invites Carlos to play a heavy metal harp solo on the new Aerosmith album? Do you accept?
Yes!

The harmonica hasn’t been invented. What instrument do you take up instead?
Drums or percussion.

Why did you choose to study with Howard Levy?
I knew I wanted to take the sounds of the diatonic further as I’ve never been a fan of the chromatic harmonica except for that traditional octave blues playing guys like Kim Wilson does. I also love Stevie Wonder and Paul Delay on the chromatic. I’m not a fan of Toots Thielemans’ sound on the chromatic (I once heard Toots play diatonic harp on an album and he could barely bend a note!)…that said, I wanted to go beyond just blues playing and fill in the missing notes, so even though I already knew how to overblow, studying with Howard was more an immersion in playing thru jazz changes. I really don’t consider myself a “jazz” player per se, but just someone that incorporates some jazzy phrasing into my blues playing. You can certainly hear this in my latest release with Jimmy Bowskill BLUES ETC..

You are unexpectedly asked to play a harmonica piece to a group of school children. What do you play?
Something rhythmic, maybe some split octave contrary movement stuff (so they go – “how can you play two melodies at once!?” ) that Levy can do so well. 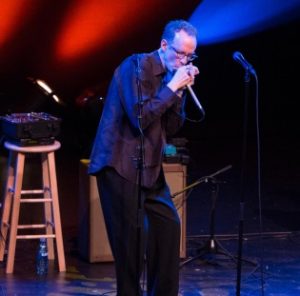 Jazz or Blues – which style do you dump overboard to stop the ship sinking?
Try to keep both afloat, or sink with both, too interconnected to let one go without the other. That said, my first love is still blues on the harmonica and without a really good foundation of this, I find a lot of overblow players over play (without a good melodic sense) or lacking good tone…

What was the last sculpture piece you finished?
A torso stone carving in my late twenties, haven’t touched sculpture since then as music fulfils.

What was the last piece of music you listened to before this question?
Legalize It on the radio just now…Bob Marley I think. [Peter Tosh -Ed.]

Despite the development of overblows, the short harp will never be regarded as an orchestral instrument – true or false?
True…although Howard Levy would beg to differ.

You are banished to a desert island with one music album. What is the album?
Too tough a question, my tastes are way too eclectic.

If overblowing is a means to an end, and not just showing off, what is that end?
To give a larger and textured colour palette; to have more “technique” under your belt. You can never have too much technique. It is about the player and who they are that gets expressed thru their instrument, so overblowing would fall into an advanced technique that simply gives one more colours.

Two harp players are discussing a del Junco signature phrase – what track are they listening to?
No idea…Heddon Tadpolly Spook..? The newer version from Mongrel Mash. 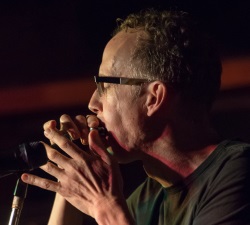 Fidel Castro – good or bad?
Initially good, but like a lot of dictators, the power goes to their heads.

What has been your most unusual or unexpected gig?
Opening up for Ray Charles with only a few weeks’ notice in 2003. Sold out of the 150 CDs I had on the 20 minute break.

You open your music case and reach for your favourite harmonica – which one?
I love G and A harps, mostly the lower keys below C. I primarily use Golden Melodies that I’ve adjusted to a compromise just intonation.

You’re allowed to play one David Burgin track to get you in the mood – what track do you choose?
Animal Walk – killer solo and attitude.

Willie Dixon invites Carlos to play one of his songs. Which song does Carlos choose?
My Babe.

What do you do to escape from music?
Ride my road (pedal power that is) bike when the weather is good. 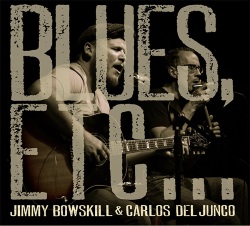 Miles Davis invites Carlos to cover for Cannonball Adderley on a track from the Kind of Blue album. Which track?
Freddie Freeloader.

If Carlos took the best ingredients of his personal musical style and turned them into a dish, what would he serve up?
A New Orleans, second line, Cuban Chicago shuffle…

Do you have a favourite sport and/or or team?
Not into team sports at all and don’t watch TV.

He was knocked out, knocked out loaded
Otis the mailman arrived and dropped his post bag by the Christmas Tree. ‘You’re baubles are looking rather splendid!’ he said, winking at the Doc. ‘Sorry I’m a bit late to help – I was stopped by a bloke with a white van by the duck pond. He asked if I’d like eight legs of venison; 50 quid he was asking. I said that’s two deer! Mwa ha ha ha! Do you get it? Well anyway, I’ve got my eye on a couple of Christmas Quackers from the pond!’

‘That’s quite enough Otis old boy‘, the Doc interrupted. ‘This should silence you for a moment. Have a glass of Glühwein!‘ Otis took a sip, then piped up again, ‘Knock, knock?’ he asked. ‘Who’s there?’ ‘Arthur‘, said Otis. ‘Arthur who?’, Jim asked. ‘Arthur any mince pies? Do you get it? Any mince pies!’. Otis burst out laughing and slopped some Glühwein on the flagstones. ‘Actually Otis old boy‘, the Doc grinned, ‘we’ve been so busy decorating, we’ve not had time to warm them up yet. We’ve ordered a Takeaway Pizza instead. One that’s deep pan, crisp and even. Merry Christmas all. Chin chin!’.

Credits
Our thanks to Carlo del Junco for the interview. You can find out more about Carlos, including his latest album Blues Etc, at www.carlosdeljunco.com