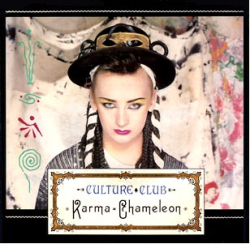 In Culture Club Harmonica part 1, we studied Judd Lander‘s harp playing on the band’s top 10 hit, Church Of The Poison Mind. Their follow up single, Karma Chameleon, went flying to the top of the charts worldwide, where it stayed for several weeks. To this day it remains a classic of 1980’s pop. Culture Club and Boy George had well and truly arrived.

To recap for a moment, Judd Lander is purported to have taken lessons from Sonny Boy II during his formative playing days in Liverpool. He subsequently relocated to London where he found studio session work and launched Charisma Records. His playing is not complex, relying as it does on cross harp blues sequences, but it is highly polished and instantly recognisable. Full of natural tone and excellent phrasing, Judd Lander gives his harp licks real ‘voice’ without resorting to digital trickery or overdriven tubes. 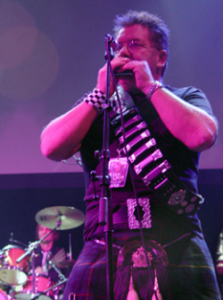 Loving would be easy if your colours were like my dreams

On Karma Chameleon Lander uses exactly the same style of harp as Church Of The Poison Mind, but this time the harp enjoys greater presence throughout the song. The harp parts comprise that signature Karma Chameleon intro riff, two chorus fills, a lead break after the ‘middle 8’, a third chorus fill and a final chorus outro fill. You’ll need an Eb major harp to play in Bb major cross harp. As you work through the tab below, be aware that Lander likes to ‘scoop’ into certain notes for effect. In our tab, an italicised note linked to a regular note indicates a scoop.

This pattern is repeated to complete the first chorus contribution.

For the second chorus, Lander adds a couple of extra fills. He starts with the same few notes and then ascends the scale like this:

He then adds the following lick:

The lead break starts low down in draw 1. Lander uses a Sonny Boy II style wah-wah on the first note, a bent draw 1 into a straight draw 1.

The second part of the break looks and sounds like this:

You then catch a hint of harp behind the vocal just after the break. The lick is:

The fills in the third chorus starts with this bluesy sequence. Big pull from the throat:

A gentle fill lower down the harp can be heard amidst the vocals that follow, but we won’t worry about this as it is hard to detect :

The song production is then scaled down to vocal harmonies with a military style snare drum backing, before relaunching into the final chorus, where the first fill is a repeat from the initial chorus above:

Then a simple repeated note:

Followed by an adapted Landeresque phrase:

A lick adapted from the intro phrase as the song fades:

And the song fades. And there you have it! There’s a loving in your eyes all the way. Here’s the video on Youtube, and before you ask, no that’s not Judd Lander on harp. And I don’t believe Boy George really plays harp either! Red, gold and green. Red, gold and gree-ee-ee-een.

See also our coverage of Judd Lander on Culture Club’s Church Of The Poison Mind.