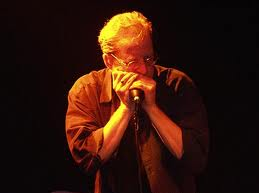 A third annual day of Harpin’ By The Sea completed, and another bucket load of memories collected!

This year we had the very great honour of welcoming Steve Baker to his UK homeland, fresh from his tour of India. During a full programme of harmonica workshops,  Steve offered his wisdom and expertise to a select group of advanced harmonica players, many of whom had travelled across the country to meet him. Meanwhile over forty newcomers attended the workshop for complete beginners with the Harp Surgery’s Good Doctor. 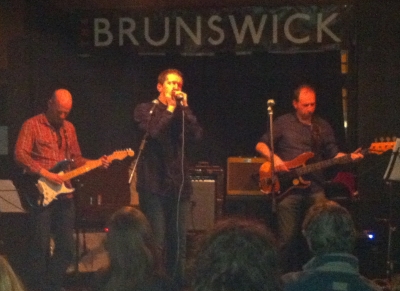 Hustle on down the line

The evening show featured the harmonicas of Darren Causton and Blues Deluxe (left), followed by Will Greener’s solo presentation. Darren delivered his five star brand of high energy electric blues, while Will barefooted into a Filisko milieu of fox chases, spirituals and vintage harping. You should find footage of all the evening’s performances at Oxharp’s Youtube Channel.

And that includes Steve Baker with Blues Deluxe. As you would expect, Steve’s playing was richer than Schlag Sahne. Like a harping Pied Piper, he led his spellbound audience on a musical Wanderung that ranged from Funky Mardi Gras to  Soul Train, Off The Top and a reggae piece, One Drop Blues that brought back the spirit of 1970’s Rock Against Racism. In Hustle On Down, Steve demonstrated his mastery of country harping technique with a turn of phrase to make Charlie McCoy sound pedestrian. 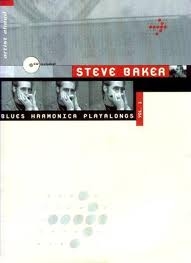 The centrepiece of Steve’s performance was Doublecrossed And Blue. For the Good Doctor this was a special moment. Together with William Clarke’s Blowing The Family Jewels, this is the Doc’s all-time favourite piece of third position harping; a piece that should be studied by any serious harmonica player. It is quite simply seminal. Witnessing it played live was a privilege.

Doublecrossed And Blue first appeared on Steve’s Blues Harmonica Playalongs Vol.1 and it was later re-worked on his 2009 album, Gotta Look Up, with Chris Jones. You can still find copies of this excellent tutorial on the internet (if you’re not a German speaker, make sure it’s the English language version before you buy).

Steve plays the piece on an A major diatonic harp. Playing in third position, this means the band is in B minor. At Harpin’ By The Sea 2013, Steve explained that the piece was originally recorded as a studio guide track for his band. He had every intention of finishing the job later, particularly as he felt he’d hit a bum bent note at the end of the second passage. 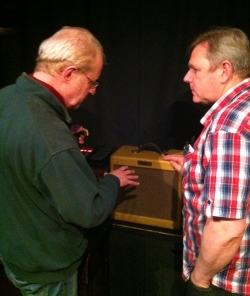 What he was referring to is the sustained third draw bend in hole 3. You will find the passage at the start of this post. On the low end of a harp, the descending third position blues scale is 4D  4B   3D”  3D”‘  3B   2D”  1D. Notionally, Steve may have had 3D” as his intended note. He actually played the 3D”‘, but planned to overdub the passage later, or else run a full retake of the harp line.

On hearing it through again however, he realised that what he’d already recorded worked perfectly. It may have been the wrong note theoretically, but his ears told him otherwise. He’d hit the mood of the piece perfectly. Steve did attempt some retakes for good measure, but somehow none quite recaptured the moment.

STOP PRESS: The expression “doublecrossed” for 3rd position is quite old, I first heard it from Have Mercy founder Chris Turner in the early 1970s and I used it in The Harp Handbook. We used to refer to the first 3 positions as “straight”, “crossed” and “doublecrossed”. That’s why my tune is called “Doublecrossed & Blue”! All the best, Steve Baker

Which is probably why we all love this track so much. Meanwhile, here’s Steve playing it live at Harpin’ By The Sea 2013: 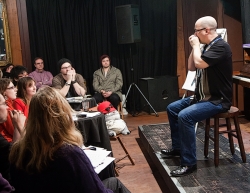 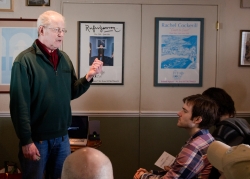 10 thoughts on “Doublecrossed and Blue”