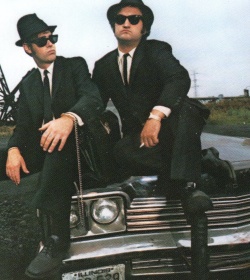 Our Lady of blessed acceleration don’t fail me now

As we know, every Blues Harp player grows twitchy when they hear the sound of Cop Cars in pursuit. Unless, of course, they happen to be driving one themselves. But have you ever tried to imitate the sound of a police chase on the harmonica? Grab your nearest diatonic and we’ll take a look. But before we do, just a few words from our sponsors, fresh from the Mount Prospect City police auction..

Before the familiar voice of the North American siren was adopted by the UK emergency services, we Brits were used to a simple ‘old-fashioned’ twin-tone alert. Amazingly, kids in the UK still race their panda cars around the carpet chirping nee naw nee naw, in preference to the modern usurper. So first let’s get cute with your old time coppers’ Black Maria. Grab your nearest 10 hole major diatonic. Any key will do. Start with draw 4 then roll across to draw 3. Continue rolling cleanly between these two holes. Now add the Doppler effect of a passing police car by bending both notes and fading the volume. Good. You are ready to entertain a live audience with the complete effect. This time start on the bent notes at low volume. Gradually release them as you build up to full volume and slowly crouch as you execute this phase. Then bend the notes again as you fade back to a low volume. Once the chase has passed, stand up and wipe your brow. A close shave. You’d ‘ave spent a good few years in chokey me old china and make no mistake.

On his American Voodoo album, Paul deLay recorded Harpoon Man which subsequently featured on the treasured Blues Harp Boogie compilation CD. Throughout the song he fires off a series of lightning harp licks on a D major diatonic (2nd position). At around 1:30 the lyrics cut in with: One night the local po-lice came to throw us out, they heard that Harpoon Man and they began to dance and shout. Yeah the po-lice did the monkey, the po-lice did the swim, they said if you don’t play that harpoon man, we’re gonna drag everybody in. On cue, deLay pumps a full throated 4 draw bend through his amp, eases it up to the straight 4 draw and modulates slowly between the two, mimicking a US-style cop siren. He also adds a layer of slow wah-wah to complete the wail.

Grab an F major diatonic, lick your lips and slide rapidly up and down the higher draw notes. This one doubles up as the switch siren used on UK and US cop cars or a neighbour’s burglar alarm.