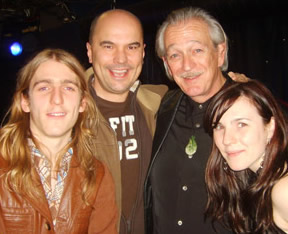 I had hoped that my enduring ambivalence towards Charlie’s music would melt in a blinding epiphany this evening. Having seen the show however, there was no change. Instead, I felt my reservations had been vindicated. One nagging question still simmered though – what exactly was it I was blind to that others understood so clearly? It mystified me. The imaginary urchin continued crying out from the crowd – ‘the Emperor’s wearing no clothes.’ END_OF_DOCUMENT_TOKEN_TO_BE_REPLACED

What was all the fuss about? 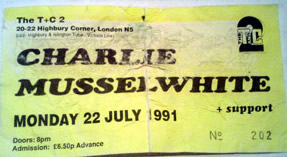 According to the display of fading gig tickets on the Harp Surgery wall, it was July 1991 when I last saw Charlie Musselwhite live at the Town & Country 2 in Highbury, North London. Charlie’s backing band opened that night with a fabulous rendition of Little Milton’s ‘Hey, Hey, The Blues Is All Right’, while his silver harp case stood open on a table at the front of the stage – a statement of the maestro’s intent. The backing band had the house revved up and jumping. Once he took the stage however, Charlie’s performance proved uninspiring. Accepted, he had flown in from the USA only hours earlier, but amidst his clever display of positional playing and monotone vocals, I grew bored. The band soldiered on but I left early, thinking to myself, ‘what was all the fuss about?’

In the months that followed, I occasionally gave Charlie’s records a spin. More through a sense of duty than as a genuine fan. Each time I concluded this was a white guy who came from the right southern state, had entered the Chicago blues scene at the right time and mixed with the right blues luminaries, but who’s musical contribution was inconsistent, if not over-rated. It just didn’t bounce. The records went back in their sleeves and onto the pile. I still didn’t get him. END_OF_DOCUMENT_TOKEN_TO_BE_REPLACED