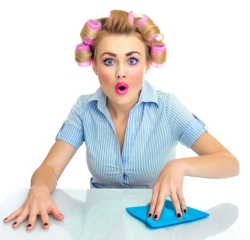 The Good Doctor was tapping the steering wheel of his bright red Volvo PV as it bowled along the village High Street. From below the dashboard came the rattle and hum not of the dodgy rocker box Greasy Rob had just re-engineered, but the rhythm of Shake A Bone; the album by Son of Dave.

The Doc pulled up outside the Harp Surgery, crunched his way along the path and, dropping his harp case inside the door, spun his homburg across the reception onto the vacant coat stand. Bull’s-eye! ‘Mama like a bit of revolution talk..!’ he growled in a faux basse more reminiscent of Al Pacino than Son of Dave. 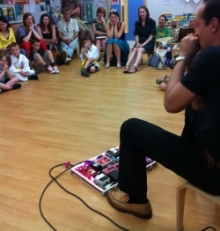 There were two glasses and two chairs

Our Monica, who was busily polishing the reception counter, looked up in astonishment. He’d almost knocked out her curlers. ‘Yew jos’ missed me ‘ead ya balmpot!’ she squealed, picking up her tin of Mr Sheen. ‘There’s a message on t’phawn fer ya’.’ Ever the gentleman, the Doc offered Monica a toffee, winked and hit the play button on the phone recorder. It was a message from his dear old friend Dave Ferguson.

The familiar baritone of Dave’s South African aksent greeted the small audience in the surgery office. Following the Surgery’s review of his  Cape Town show, Dave has been invited to play the National Harmonica League festival in Bristol. Was there any chance of a gig in Brighton too? The Doc got straight on the case and two weeks later, Dave was in town ready to entertain the younger harmonauts of the village before playing The Ranelagh Arms that evening. ‘It’s good to make mistakes’, he entreated his elementary school enthusiasts, ‘that’s how you learn.’ The children looked on, utterly mesmerised. 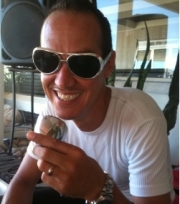 And two people with one pulse

Before the evening show, seated behind a mountain of fish fingers, mash and peas, Dave and the Doc chatted away like father and prodigal son. Dave had just completed twenty-four dates in twenty-six days and was looking forward to gig twenty-five at The Ranelagh. ‘So how did you get to know Son of Dave and who was first to come up with the harp-boxing technique?’ quizzed the Doc. Dave replied between fork loads of mash and ketchup.

‘I lived in London in the late nineties and worked for a few years at the Barbican Centre as a technician. I’d do the sound and lighting and also run movie nights using old style reels. Around that time I’d fixed up a couple of old mics for Benjamin D’Arby, now Son of Dave, and seen what he was working on. So I started using the down time 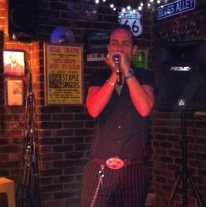 between reel changes at the Barbican to plug in some headphones and experiment with loop and effects pedals of my own. On returning to Cape Town, I soon realised it would be easier to find work by going it alone. Queue the one-man freak show!’

‘And are you guys still friends?’ asked the Doc. ‘Oh absolutely’, Dave answered, ‘I’ve got his number, although we’ve not spoken for quite a few months.’

Somebody stopped the moving stairs 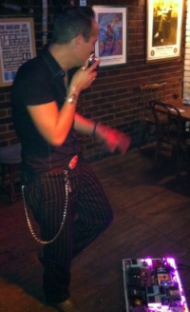 That evening at Brighton’s home of blues, The Ranelagh Arms, Dave and his rig tore it up with everything imaginable. Low Rider, Me And The Moon and Melting Pot, to Iko Iko, Last Train Gone and White Girl were all rolled out. Gripping a cool glass of Harvey’s, The Doc watched in awe. Then, between numbers, Jimmy the Chef leaned over with a huge smile and yelled ‘did you plan this on purpose?‘ ‘Yes‘ the Doc responded. ‘Dave got in touch and we set the gig up with Barry the Landlord. Isn’t it great to finally have him play the Ranelagh?‘ Jimmy slopped his beer with excitement. ‘No I mean did you plan to have Dave Ferguson playing at the top of the hill the same night Son of Dave is playing at the bottom of the hill?‘ The Doc froze in disbelief. ‘Do what? Are you serious?‘. Jimmy flashed his ticket for the SoD show… 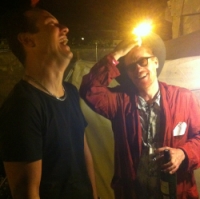 As soon as Dave Ferguson’s show was over, the gang bundled him down the hill to the festival tent and back stage. Who’d have thought it possible? Dave and Son duly enjoyed the most unlikely of reunions. And while Alabama 3 were busy sharing their post-gig mind expansion system on one side of the backstage area, Dave and Son sipped a can or two of Badger’s Arse and laughed long into the night. The Doc put his had on Jimmy’s shoulder and they raised a toast. ‘You’d have more chance of pissing in the Queen’s handbag than witnessing this‘, the Doc slurred. ‘Here’s to Dave Squared!‘.

Since the time of this event took place, Son of Dave has recorded a brand new album called Blues At The Grand. Quite appropriate for anyone living in Brighton. Here he is to tell you all about it. We’ve also added links below to a previous SoD interview that Murray the Surgery’s former Apprentice reported for us.