If I leave my love behind, nobody’s fault but mine 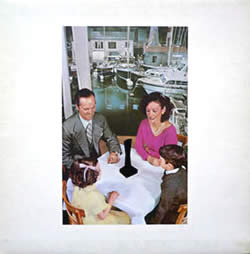 And so to the wonderful world of heavy metal harmonica. Use of the humble harp in big time rock’n’roll should not really be a surprise. It’s no secret the likes of Led Zeppelin, Cream, Aerosmith, Deep Purple, Black Sabbath and their peers drew inspiration directly from the great blues masters. So a splash of harp is quite fitting.

On this note Otis, the Harp Surgery’s postman, delivered this lovely letter this morning. It brought a big smile to the Good Doctor’s dear old pre-breakfast visage (him being a life long dirty Leeds fan).

I was wondering if you can answer my question?? What key harp is Robert Plant playing on the Led Zeppelin track ‘Nobody’s Fault but Mine’???? I’ve been learning the harmonica for a few months now and I find your website very inspiring!

Thanks, Johnny. From Leeds.

Thanks for your question and for your encouraging compliment. Let’s see if the Harp Surgery can fix it for you. Now then, as it happens young Johnny, the Good Doctor has looked into the one and only Led Zep, you see, and the answer to your question is E of the major variety. Ah yes. But enough of the Jimmy Saviles…

If this didn’t give us the key of the song for any reason, another trick is to fast forward to the finish. Most tunes end on their root note and this reveals the key of the song. Unless you’re playing Cajun, but that’s subject matter for another time. This track finishes on E. So does Robert Plant’s harp solo.

Playing the song in E would make sense in general terms. It is the guitarist’s favourite key and the classic blues key. For both reasons, the chances are very strong that Robert Plant will be playing an A harp in second (cross harp) position, with the anchor point in draw two. This opens up all those fine blues licks. Of course there is a small chance it could be another position on another harp. An E harp in first for example. But the acid test is when you try “By learning to play in different positions, you will soon be able to detect them when listening to others”to copy the licks Robert Plant uses. Can you find them on an E harp in first? Or a D harp in third? Partially perhaps, but not fully and not comfortably. Once again, the best fit is an A harp played in the cross harp key of E.

You can use this method to determine the key of most songs. First identify the root note as suggested above. Now determine whether the song is major or minor in its structure. Does it have a happy or sad feel. Beware Ska and Reggae which often use minor chords but in an upbeat format. Finally, experiment and find the right position on the right harp for the correct key, best feel and biggest licks. By learning to play in different positions, you will soon be able to detect them when listening to others. Each position has its signature qualities. You can find more information about position playing in our Harp Skills section.

Why is this all a bit tricky on Nobody’s Fault But Mine?

There are two additional details which may have thrown you out. Just ahead of the solo, Robert Plant hits a high-end screech on 9D and 8D, which makes the harp key indeterminate at that point. It’s not until he launches into his full solo that he gives the game away. It starts:

The second detail is the main riff itself. It changes from major to minor. That flattened 3D’ in line two of the main riff tab (top) is the culprit. In the second half of the riff it becomes a straight 3D. If you draw 2D-3D-4D on your A harp, you have a triad E major chord. If you could play the same three draw reeds but bend the middle reed (draw 3) “Think of it as adding the best ingredients to your blues stew”down a semitone, you’d produce the triad E minor chord. Because this is a physical impossibility, we have to hit the flattened third as an individual or passing note when going minor. Robert Plant uses the 3D’ a lot throughout the song, even as his point of resolution for certain major phrases, because you can do this in the blues idiom without jarring. It’s what we call a blue note. It’s the magic ingredient in blues and it’s allowed; think of it as the best herb or spice for your  cordon bleu blues stew. As an aside, I recommend any cross harp blues player to practise ending their phrases on 3D or 3D’ instead of the standard 2D root, for variety and musical development. This also expands your comfort zone for harmony playing.

Flattening the third and sixth notes of any major scale by a semi-tone changes the major to a minor scale. From a happy to a melancholy feel. You can play in minor keys on the diatonic harp by using alternative positions such as third and fourth, but then you’d be unable to change to the major chord which this song needs without significant overbending ability. It would probably get messy. So on this occasion, once again it has to be cross harp. You just need to make sure all your draw bends are up to scratch for that flattened third and those essential blues licks.

From the opening riff, you could be mistaken in thinking Led Zep were on some kind of Far Eastern trip. Failing this, “it’s their interpretation of what started life as a Negro Spiritual”you might recognise a Mississippi blues groove and assume it was something evocative they’d thrown together themselves. In actual fact it’s their interpretation of what started life as a Negro Spiritual. The earliest known recording is by US blues guitarist Blind Willie Johnson from around 1927 and was later popularised by the Grateful Dead in the late 1960s. Led Zeppelin had already featured an image of Willie Johnson on their groundbreaking Led Zeppelin II album in 1969 and now they used his music as inspiration for what was to become a favourite feature in their live performances.

I am working from the debut version recorded in 1976 on Led Zeppelin’s Presence album. The harp solo cuts in half way through the track at around the three minute mark and lasts for about 45 seconds. It is raw and unsophisticated, but effective. To play it, you’ll need to grab an A major diatonic and play cross harp in the key of E major (and minor). You can listen to the song here.

An impassioned 9D with shades of 8D

Here’s footage of Led Zep’ playing Nobody’s Fault But Mine live at Knebworth in 1979, complete with that raw harmonica solo at around 2:16.